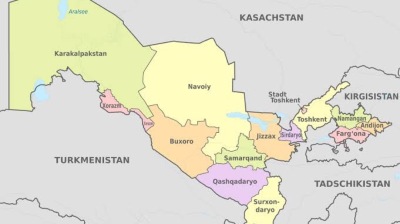 In the face of the biggest protests in 17 years, Uzbek President Shavkat Mirzyoyev backed down and cancelled proposed changes to the constitution that would have stripped Karakalpakstan's autonomous status / wiki
By Ben Aris in Berlin July 3, 2022

Uzbek President Shavkat Mirziyoyev backed down on July 3 and cancelled a plan to remove Karakalpakstan autonomy from the constitution in the face of massive protests that were rapidly turning violent.

Tensions in the poor desert region of Karakalpakstan soared when tens of thousands took to the streets of the region’s capital Nukus (video) in protest after details of changes to the Uzbek constitution, to be made at the end of this year, were released that would end Karakalpakstan's special status as an autonomous republic within Uzbekistan.

The demonstration was by far the largest in the country since a pro-democracy demonstration in Andijan in 2005, where the former president Islam Karimov ordered police to open fire, killing several hundred people, according to reports at the time.

The Nukus demonstrations come in the context of similar protests in Almaty in Kazakhstan in January that came close to overthrowing the government until President Kassym-Jomart Tokayev called for military help from Russia that quickly quelled the unrest.

Likewise, protests in Kyrgyzstan last December quickly toppled the government and led to a change in president, installing Sadyr Japarov.

Keen to nip the crisis in the bud, Mirziyoyev flew to Nukus in person on Saturday, July 2 to meet with local leaders and protesters and quickly cancelled the changes to the constitution in the hope of restoring peace. At the time of writing, it is unclear if the protests have stopped.

Mirziyoyev met regional lawmakers and community representatives from the local Mahallas and said that he would take the views of the local population into consideration.

“Considering that the process of discussing changes and additions to the constitution is still ongoing, and after having considered the views of people in Karakalpakstan, the president has decreed it necessary to leave unchanged the Articles 70, 71, 72, 74, 75 of the current constitution,” Mirziyoyev’s office said in a statement released on July 3.

Eurasianet reports that while Mirziyoyev has adopted a conciliatory approach, other local officials have taken a harder line, blaming the unrest on local criminal groups and pointing to violent clashes with police. According to some reports, a few policemen were killed over the weekend and social media has footage where it appears a small crowd of protesters were attacking police.

As the government quickly closed down phone and internet networks, verifying reports has been made very difficult.

What started as an apparently peaceful demonstration that saw many thousands gather on a square near a central Nukus market eventually degenerated into clashes, reports Eurasianet.

Security officials insist that the crowd sought to storm government buildings, although the government’s information blackout has made it impossible to establish if this is true. Witnesses told Eurasianet that an Interior Ministry special purpose mobile unit deployed smoke and stun grenades, rubber bullets and a water cannon against protesters.

Those reports appear to be corroborated by footage on social media showing riot police apparently firing rubber bullets, and water cannons in action against the crowds.

There have been scattered reports of demonstrators sustaining serious and possibly even fatal injuries. Images widely shared across social media have shown at least two members of the public with what appear to be catastrophic injuries. Eurasianet was unable to confirm claims about fatalities as of July 2, and officials had yet to issue a comment on this point.

An unspecified number of people has been detained, according to a statement signed collectively by the Karakalpakstan branch of the Interior Ministry, the republican government and the regional law-making chamber, known as the Jokargy Kenes.

Karakalpakstan is an ancient region that is seen as the ancestral home of the Turkic people and residents are ethnically distinct from Uzbeks. The region was made autonomous in the 1930s by the Soviet government but chose to remain part of Uzbekistan following the breakup of the Soviet Union.

However, as part of this agreement the region was given the right to vote on succession from Uzbekistan. The changes that Mirziyoyev was proposing would have ended the region’s autonomous status and removed its right to succeed from the rest of the country.

In 1936, after much territorial rejigging in the early Soviet era, the Karakalpak Autonomous Soviet Socialist Republic was subordinated into the Uzbek SSR. In 1993 Karakalpakstan reached an agreement with the central Uzbek government to remain part of the country for at least 20 years, but reserve the right to hold a referendum on withdrawal from Uzbekistan.

This promise was acted on, and the promises made to Karakalpakstan in the 1990s have largely been forgotten, but this weekend’s demonstrations may revive them, says Ivan Klyszcz, a North Caucasus and Russia doctoral candidate at the Johan Skytte Institute of Political Studies of the University of Tartu in Estonia.

“To understand today's crisis in Karakalpakstan, one must look at recent events as the result of long-festering grievances and a long-standing constitutional crisis in Uzbekistan,” Klyszcz said in a thread on Twitter. “Without Karakalpakstan's continued existence as an autonomous entity, Uzbekistan would be transformed into a different state. Namely, it would change the way a third of Uzbekistan's territory is governed. Due to the paramount strategic value of Karakalpakstan's location, the implications of such a shift would be profound.”

Karakalpakstan’s autonomy has been rankling since the end of the Soviet Union as unfinished business during the transition to independence. Nominally Karakalpakstan stayed in Uzbekistan but any path to true autonomy was cut off right away and Klyszcz characterised the promises for a succession vote as a “sham.”

“The symbols of autonomy are nothing but the façade for what in reality is just another region under Tashkent's rule,” Klyszcz said. “The decision to end Karakalpakstan's autonomy only underscores that Tashkent sees the autonomy status as a formality. After all, the autonomy status was never an obstacle for [Mirziyoyev]. Taking autonomy away would have been a way to settle the country's constitutional crisis.”

The protests have introduced some uncertainty into Mirziyoyev's extensive reforms. As bne IntelliNews reported in the Uzbekistan Rising special report, the economic part of the reforms have been very successful. However, the political reforms, other than bolstering the Mahalla system, have largely yet to start.

The constitutional changes proposed for the end of this year is the first step towards political reform and the government claims to have gone out of its way to reach out to consult with the people as part of this process, Odiljon Tojiev, Deputy Speaker of Uzbekistan’s parliament in Tashkent, argued in an editorial published in bne IntelliNews “Uzbekistan’s constitutional reforms are for the people.”

“But we are doing something unusual. We have invited the citizens of Uzbekistan to help us write the amendments they want. On June 3, the Constitutional Commission began sending SMS texts to 30mn mobile phone subscribers, inviting them to make suggestions. They could do so on our website, our Telegram channel, by email or they could phone in to our call centre,” Tojiev said in his article.

Observers will be watching closely in the coming days to see if Mirziyoyev's decision to cancel the constitutional changes will be effective and if the protests will lead to more concessions on the part of Tashkent.

“But risks remain. Popular mobilisation is underway. The choice between repression and power sharing is ahead. Karakalpakstan's autonomy could gain at least some features of real self-government,” Klyszcz concludes.