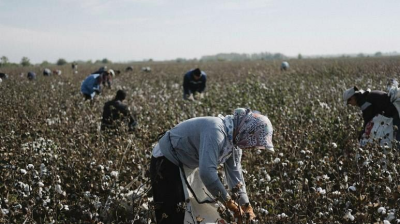 Uzbekistan hopes to increasingly crack open markets abroad by certifiably ending forced labour in the cotton fields.
By Kanat Shaku in Almaty May 15, 2020

Uzbekistan recently adopted a presidential decree to peg its domestic cotton sale prices to those recorded by the New York Mercantile Exchange. The market-based price mechanism is expected to cut the cost of raw cotton for textile companies by around one-tenth.

The strategy is a key part of a government effort to move the country away from shipping raw cotton exports in favour of instead producing finished textile products such as fabrics and clothes. Uzbek textile exports in 2019 reached a value of $1.9bn—the authorities aim to raise this figure to $15bn. President Shavkat Mirziyoyev has, meanwhile, said he wants to see finished textile product output raised to around $7bn within five years. And the government has projected that this year the country will boost its textile exports to $3bn from $2bn in 2019. Of course, such projections could be impacted by coronavirus (COVID-19) downturns yet to form part of the calculations.

Moreover, among other measures designed to support the domestic textile industry, the process that allows producers to get value-added tax rebates once they ship their goods out of the country has been simplified.

Additionally, the decree states that tariffs will be removed entirely on imports of a number of production inputs required by the Uzbek textile industry, starting from 1 January 2022.

The economy ministry announced in late 2019 plans to stop exports of raw cotton in 2020, but did not specify any dates. Such a ban would need to arrive in tandem with the full-scale processing of cotton fibre domestically.

That would mark the end of the first stage of Uzbekistan’s textile industry programme. The second phase would focus on enhancing the processing of cotton yarn and exporting more finished products, with an increased value-added tax.

The Central Asian nation’s long-term goal focuses on entering the European Union textile market. To this end, Uzbekistan seeks gain entry to the Generalized System of Preferences + (GSP+) tariff system this year. That would allow better access to the EU market. Uzbekistan is currently part of the GSP Standard system.

In mid-April, the international Cotton Campaign coalition of human rights groups declared that it would be premature to lift the longstanding global boycott of Uzbek cotton and textiles as called for by Tashkent. The statement was a response to the Uzbek government requesting the lifting of the boycott to help the country deal with the economic impact of the coronavirus pandemic. The Cotton Campaign, which also targets forced and child labour in Turkmenistan, said in an April 16 statement that only the complete eradication of forced labour along with civil society reforms such as the registering of NGOs that monitor worker rights would spur it to take such an action.

The boycott has been supported by international companies including Amazon, Calvin Klein, Adidas and Inditex, although the US lifted its market ban on Uzbek cotton last year. As things stand, Uzbekistan, a nation of 34mn and one of the world’s biggest exporters of cotton, mostly sells cotton and textiles on Asian markets, which the government has said means lower prices and limited growth opportunities.

Another difficulty for Tashkent is that more than 300 brands and retailers remain signatories to an international boycott of Uzbek-sourced cotton and textiles, that goes under the name of the Uzbek Cotton Pledge. Adidas, Spanish fashion retailer Zara, American department store chain Macy’s and Swedish-Dutch furniture-maker Ikea are among the big names signed up.

The UN’s International Labour Organization (ILO) in a February report said that 1.75mn people took part in the annual cotton harvest in Uzbekistan last year. It said that around 102,000 of them were victims of forced labour, but that was down by around 40% compared to the number of people forced to pick cotton in 2018. The UN labelled this change for the better as "major progress", since 94% of cotton pickers were determined to have worked voluntarily; just a few years ago the entire sector relied on forced labour.

Over 2,000 firms in Uzbekistan, a country of 34mn, work in textiles, employing over 360,000 people. Much of the country’s cotton is exported to Russia. Russia bought 73mn square metres of Uzbek cotton fabric in the first six months of the 2019-2020 marketing year. The EU imported 17.74mn square metres in the same period.

Green financing reached close to 50% of the EBRD’s volume of investment in 2019, but as he leaves the bank Chakrabati warns of the need to put the green economy at the heart of the post-COVID recovery.

With its launch scheduled for 2023, Siberia's Udokan copper deposit is among the largest in the world.

Letter to Putin exposes campaign against US investor Calvey

It's a sort of coronacrisis-inspired version of the swords to ploughshares story. WPA, the Czech Republic’s leading aircraft component supplier, has turned its high-tech production skills to producing high-quality respirators