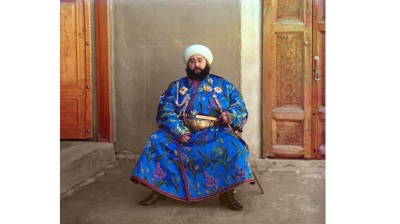 Uzbekistan has been weaving beautiful luxury textiles for millenia, but following a root and branch reform a few years ago the textile production and export business has been transformed.
By Ben Aris in Tashkent November 25, 2021

Uzbekistan has a very long history of making luxury textiles and today the country is trying to revive them. The khalat, the vibrantly coloured long-sleeved silk robe worn by Uzbeks, has been a hallmark of the country for thousands of years and is still worn today by many.

Uzbek craftsmen in Khiva, and the country’s other ancient Silk Road way stations, still practise the delicate embroidery and weave the multi-coloured patterned cloth as their ancestors did, but following a revolution in the textile business in the last few years they are now turning their attention to T-shirts, jeans and shoes.

Uzbekistan is famous for its high quality cotton production that used to be the country's main source of foreign exchange earnings. However, in 2017 Uzbek President Shavkat Mirziyoyev simply banned the export of raw cotton entirely, forcing the whole industry to invest into textile production almost overnight.

It may have been a rather heavy-handed reform to the sector, but it worked. Within only a few years textile production has soared and the export revenue earned has already overtaken the money Uzbekistan used to make from selling its raw cotton aboard. The idea of going up the value chain is at the core of all of Mirziyoyev's reform ideas, but it has probably been most successful with the changes made to the cotton-textile complex.

“There is a blooming of Uzbek textiles. We have a new openness to the rest of the world and there have been many changes in the last five years,” Jasur Rustambekov, deputy head of the textile association of Uzbekistan, told bne IntelliNews in an interview in Tashkent. “Textile exports have been exploding. In 2016 Uzbekistan exported to 43 countries; today it exports to 72.”

The production of textiles has been supported by advances made in cotton production. In 1991 Uzbekistan was growing 50mn tonnes of raw cotton, which produced 1.7mn tonnes of cotton fibre but only 7% of the raw cotton was processed into textiles, says Rustambekov.

“In those days Uzbekistan was in the top five biggest producers of cotton in the world. But it was an unfair situation with people working in the fields,” said Rustambekov. “The transformation of cotton production was very hard. Why? Because no one wanted Uzbek textiles, only the raw cotton.”

And cotton production is only like to improve from here, as in 2018 the state launched a privatisation programme and in under two years has sold the entire sector off to over a 100 separately privately owned firms. Coupled with the concurrent ban on raw cotton exports, the whole sector has been transformed. This stands in stark contrast to the regime of former president Islam Karimov, who ran a more or less unreformed centralised economy, where the state owned all the key assets.

“As a result of the changes today we are in the first place in terms of cotton fibre production. Before we earned about $1.5bn from raw cotton exports, but now we will get about $500mn from cotton fibre and another $3bn from the export of textiles in 2021. That means new jobs for people and more tax for the government,” says Rustambekov. “There are no state companies in the sector any more. It is all in private hands. The sector was privatised in 2018 and the cluster system [was] introduced to turn raw cotton into textiles more efficiently.”

The state has also abandoned the old system of forcing students, doctors, teachers and any one else the state could order or cajole to work in the cotton fields when the harvest was ready. That brought down accusations of forced and child labour and the Cotton Campaign was set up to raise public awareness and organised a very effective boycott of Uzbek cotton products.

A boycott of Uzbek cotton was launched in 2007 and was joined by some 300 companies that under public pressure refused to buy Uzbek cotton products.

Since then, the ban on Uzbek cotton products has been gradually lifted as the Mirziyoyev wound down the use of forced and child labour, which has been completely halted since the privatisation of the sector, the government claims.

In August last year the activists along with the International Financial Corporation (IFC) and other donors met with Uzbekistan's Ministry of Investment and Foreign Trade, Agriculture, Labour and other state bodies, and publically welcomed the government’s pledge to seek responsible investment and completely end the use of forced labour in the cotton fields.

“The Cotton Campaign welcomes the commitment of Uzbekistan’s Ministry of Investment and Foreign Trade to seek responsible investment in Uzbekistan‘s cotton sector and to support reforms to end forced labour,” Allison Gill, senior Cotton Campaign co-ordinator at GLJ-IRLF adds. “As brands are looking to get out of the Uyghur region, Uzbekistan provides an opportunity – to develop new sourcing and to come in under a co-governed structure where workers, producers and brands all have a seat at the table,” the Cotton Campaign said in a statement at the time.

Unwinding the boycott is taking time, and few of the big multinational textile retailers have set up production in Uzbekistan yet, that stage is coming soon, says Rustambekov.

“Most companies joined [the boycott] on a voluntary basis and were free to leave again, and many have,” Rustambekov told bne IntelliNews. “The US Department of Labour declared us free of child labour and since 2018 this has no longer been a problem. The international organisations, including the IMF, have recognised the new child labour-free status too.”

Since then the Uzbek government has invited delegations from the NGOs and international financial institutions (IFIs) to come and inspect the cotton harvest each year and check the labour practices, including representatives from the International Labour Organisation and the EU.

The exports of textiles are flourishing as the newly established privately owned companies develop their markets, made easier since the currency and exchange controls were lifted in 2017 allowing them to deal directly with customers in dollars.

The main markets so far are places like Turkey, China and the other members of the Commonwealth of Independent States (CIS). But more recently the EU has emerged as a major new market, which is only 14 days away by truck, says Rustambekov. In April this year the EU granted Uzbek textiles a special preferential status that allows exports to the EU with no quotas and no duties. Uzbekistan also has a preferential trade deal with the US where there are also no quotas, but there are export duties to be paid. Exports of textiles to the EU have already jumped fourfold y/y since the new special status was granted.

The next phase will be with the multinationals move in and start to produce their shoes, jeans and T-shirts in Uzbekistan. While preliminary deals have already been signed with international shoemakers Nike and Adidas last September the big deals are yet to be done.

“We are in talks with more than 100 major brands, and we have invited everyone to come and see. But it will demand lots of investment – more than $2.5bn is needed. Still we are already attracting about $500mn a year into setting up manufacturing plants,” says Rustambekov.

The first investment began in 2017 with the liberalisation of the sector, as “that allowed the first foreign investment to happen and the first international manufacturing business could start,” says Rustambekov, who adds there are about 200 international companies already working in Uzbekistan, although none of them are big ones.

“There are British, Swiss, Dutch, Austrian, Latvians, companies from China, the UEA and Kingdom of Saudi Arabia, as well as lots of Poles,” says Rustambekov.

In 2020 Uzbekistan produced $2bn worth of textiles for export and expects to sell $2.2bn this year before rising to $3bn the year after. But those are only the exports. As the most populous country in Central Asia and the third most populous in the CIS, Uzbekistan also has a large domestic market: including the domestic market the textile business is currently worth $4.7bn, says Rustambekov.

“We don't just work for the export market. The internal market is growing every year too. But broadly speaking you can divide the market into four: the internal market, the CIS, Turkey and China,” says Rustambekov

Who needs a war?
7 hours ago
Outbreak of calm grips Ukraine
7 hours ago
Primark to launch in Romania as it pursues CEE expansion
14 hours ago
All eyes fall on Nazarbayev clan’s extraordinary wealth as Kazakhstan’s Tokayev asserts authority by targeting super rich
1 day ago
UniCredit's hopes of acquiring Russia's Otkritie Bank marred by geopolitical tensions
4 days ago