Uzbeks engulfed by worst dust storm in at least 150 years 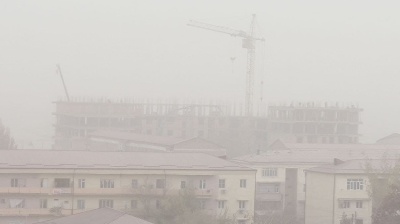 The concentration of dust in Tashkent’s air was 30 times the permitted level.
By Muzaffar Ismailov in Tashkent November 8, 2021

While governments have been racking their brains over how to influence the climate crisis at the COP26 climate change summit in Glasgow, the people of Central Asia’s most populous country experienced a freak weather occurrence that they haven’t seen in more than a century.

A sudden and severe dust storm struck and engulfed Tashkent, the capital city of Uzbekistan, and several regions on the evening of November 4. People were advised to stay home and close all windows and doors.

In Uzbekistan, Tashkent, as well as the Tashkent, Syrdarya and Jizzakh regions, and to an extent the Fergana Valley, suffered the most.

The air sensor installed at the US Embassy in Tashkent showed critical indicators, with the capital city suddenly the second most polluted city in the world.

People who spoke to bne IntelliNews were of the opinion that the reason for the weather anomaly was the construction boom and the massive “tree cutting campaign” initiated by the government.

“Doors, windows have failed to keep the dust outside. At some point it was even hard to breathe,” said one local resident.

By 9pm on November 4, the concentration of dust in Tashkent’s air was 30 times the permitted level. The next afternoon, it was still 10 times in excess. Ambulance services around the country received 4,000 calls seeking help for respiratory problems.

Several experts linked the disaster with an anticyclone from Russia.

The country’s meteorological organisation Uzhydromet, meanwhile, said such phenomena had not been seen in more than 150 years of meteorological observations in Uzbekistan.

“Under the influence of gusts of wind, the parched upper layer of soil rose up, creating the effect of a dust and sand haze, with a deterioration in visibility to 100-200 metres in a number of districts in the country,” it said.

Uzhydromet also confirmed a belief that the construction boom had exacerbated the situation.

“Of course, large-scale construction works, which are under way in many regions of the country, made their contribution to the emergence of this phenomenon, in as much as they generate very large amounts of gritty materials,” it said.

The weather forecast, meanwhile, was not encouraging. No precipitation is expected on the territory of the republic until November 12. There is a high probability that dusty haze particles in the atmosphere will persist in the coming days.

President Shavkat Mirziyoyev, who had his inauguration ceremony on November 6 following his big re-election win in the presidential elections, commented on the cataclysm that struck his country.

“The negative impact of environmental threats is increasing in our country. This was also confirmed by the sandstorms that occurred last night. The situation with the drying up of the Aral Sea is becoming increasingly tense,” he said.

According to Mirziyoyev, Uzbekistan needs to take systematic and comprehensive measures to implement the UN General Assembly resolution on declaring the Aral Sea region a territory of environmental innovations and technologies.

“It is also necessary to intensify our efforts to develop a World Environmental Charter aimed at forming the foundations of a new UN environmental policy,” he added.

To somehow fill the gaps that have occurred following the construction boom, Mirziyoyev last week announced a massive “urgent 40-day tree planting campaign”. According to the campaign, the government will plant 200mn tree seedlings and shrubs per year and increase green zones in cities from the current 8% to 30%.

“If you count the trees that were supposedly planted over so many years, there shouldn’t have been a space spare in Uzbekistan. Most of those that were planted dried up due to the lack of systematic work and care. Taking into account the current and projected environmental situation, we elevate tree planting to the rank of state policy. Therefore, it is necessary to implement the project with careful preparation of the irrigation system, clearly defining the monetary issue,” Mirziyoyev said.