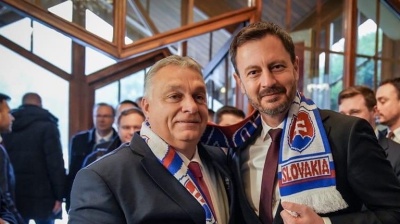 Slovak premier Eduard Heger gave Orban a scarf with a Slovak symbol saying, “I have noticed that Viktor Orban has an old scarf so that is why I gave him a new one”. / Eduard Heger/Facebook
By Albin Sybera November 25, 2022

Czech Premier Petr Fiala told media at a press conference following the V4 leaders meeting in Slovakia that Hungary agrees with the other countries that “Russia must not pose a threat to Europe” despite “different views on some matters”.

The V4 meeting took place on November 24 in Slovakia's second largest city Kosice not far from the Ukrainian border and as news emerged that the European Commission is going to withhold up to €13.3bn in EU fund transfers over Fidesz-sanctioned systematic corruption and rule of law backsliding in the country. Hungary’s economic problems and political isolation could yet deepen.

“We have had an opportunity to clarify some matters and some misunderstandings and positions, which appeared in the past,” Fiala said about the meeting, which was dominated by Russia’s aggression in Ukraine, the energy crisis and migration.

Hungarian premier Viktor Orban reiterated Hungary’s opposition to the EU’s efforts to raise cash for Ukraine on financial markets. “We support financial help for Ukraine, we consider it right and needed. However, Hungary has already allocated its share from our own [national] budget”, Orban told the media.

Just ahead of the meeting of V4 premiers, Orban sparked a diplomatic storm after he posted a photo of himself wearing a scarf in Hugrarian national colours and showing the country in its pre-WWI borders, which included parts of present-day Austria, Croatia, Romania, Slovakia, Serbia and Ukraine.

In response, Slovak premier Eduard Heger gave Orban a scarf with a Slovak symbol saying, “I have noticed that Vikor Orban has an old scarf so that is why I gave him a new one”, and posted a photograph on his Facebook profile.

Heger also asked his Czech, Hungarian and Polish counterparts to help Slovakia cope with the the health crisis which is set to deepen as more than 2,100 doctors filed resignations in protest against the working condtions in the sector and the cabinet has yet failed to reach an agreement with labour unions to avert this.

V4 leaders also vowed to help Hungary cope with the migration flow and called on the EU external border to be protected. “We have supported Hungary not just declaratively but also physically – be it by deploying more policemen or financial assistance”, Heger said at a press conference. Orban stressed that Hungary is the only country facing a migration flow from two directions, referring to the southern route used by the war refugees from Syria and the eastern one from Ukraine.

The Hungarian strongman announced that his country supports Finland’s and Sweden’s Nato accession. “The government had taken the decision, we have also informed Sweden and Finland. They have not lost one second of membership in Nato,” Orban stated.

Polish premier Mateusz Morawiecki criticised Hungary for lingering with the accession approval of the Nordic countries, and ahead of the meeting Morawiecki said Czechia, Poland and Slovakia will ask Hungary to speed up the ratification.

“We have been given a promise that this should happen at the first session of the parliament next year, so the ratification will take place in about a month and something”, Morawiecki said at a press conference.

The Hungarian government submitted the draft ratification law to parliament weeks ago but the parliament, with a two-thirds majority by Fidesz has not yet put it on the agenda.

Of the 30 countries of the military alliance, only Hungary and Turkey did not ratify Sweden’s and Finland’s accession.

Some analysts noted that Orban was using the delay as some form of pressure on the EU to release €7.5bn of cohesion funds. Budapest is also awaiting the approval of a €5.8bn post-pandemic recovery plan (RRF).

RBI's 2022 profits soar to €3.6bn, with Russian operations representing more than half
Russian gas pipe flow dips to record low in January
Only Hungary and Russia heading for recession in 2023 as Emerging Europe shows its resilience