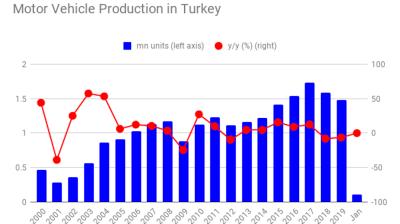 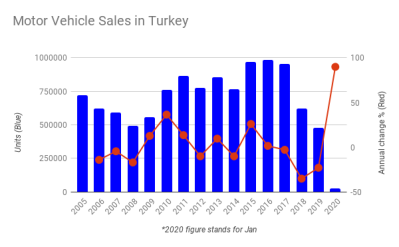 Underlining the emergence of stronger consumer demand seen for vehicles in an economy stoked by aggressive monetary easing and looser fiscal policy, the country’s passenger car imports leapt 102% y/y to 14,000 units in January, when vehicle sales (passenger cars and LCVs combined) on the domestic market jumped 89% y/y to 28,000 units.

Car loans stood at Turkish lira (TRY) 6.7bn as of February 7, up from TRY6.3bn a year ago, according to the latest figures from banking industry regulator BDDK.

Data from the trade group showed that the industry shipped a total of 60,000 vehicles to foreign markets, collecting $2.5bn in export revenues in January, a 3.5% increase on the same month of 2019.

Cautious discussion of lifting restrictions in some countries as strict lockdown measures keep the number of cases in the hundreds or low thousands.

Central bank seen as set to opt for more easing but all eyes are on floundering lira. If it falls much further it could limit room for policy support.

Russia Services PMI index crashes to a new all-time low of 37.1 in March

The IHS Markit Russia Services Purchasing Index (PMI) index crashed to a new all-time low as the double whammy of an oil price collapse and the stop-shock caused by the coronavirus pandemic hit the services industry.

The coronavirus pandemic drove the decline of the indicator, which is likely the first in a series of steeply deteriorated macroeconomic readings to come out this month.

Coronavirus infection rates reined in across much of Central and Southeast Europe
2 days ago
Oil price crash takes 0.5pp off Turkey’s inflation rate
4 days ago
Russia Services PMI index crashes to a new all-time low of 37.1 in March
5 days ago
Poland’s PMI the first indicator pummelled by COVID-19
6 days ago
Balkans have some of the world’s strictest anti-coronavirus measures
8 days ago