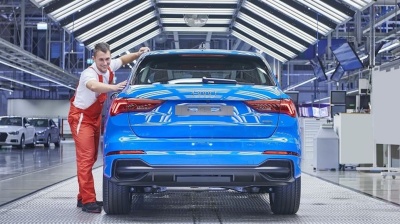 The first SUV from Audi Hungaria's plant at Győr: start of production of the Audi Q3.
By bne IntelliNews May 15, 2019

Hungary's industrial output rose 8% y/y in March, according to both raw and adjusted figures, up from 5.9% in the previous month, the Central Statistics Office (KSH) said on May 14. In a monthly comparison, industrial output was 1%.

Hungary's annual industrial growth was the third highest in the EU and fourth on a monthly basis. First quarter growth was 6.2% y/y.

Output of the automotive sector rose 12.8% y/y in March, the highest rate in two-and-a-half years, accelerating from 10% in February and 4.9% in January. The automotive sector has the largest weigh in industrial output accounting for 27% of manufacturing output.

The figure peaked in 2015 with a 28.9%, according to the compilation of business portal Portfolio.hu. The drop was the result of other sectors picking up the slack posting growth above the average. This is in line with the government's strategy to reduce dependency on the vehicle sector.

The output of the computer, electronics and optical equipment sector, which accounts for around 12% of manufacturing output, rose 7.8%.

Industrial exports grew 7.7% in March as exports of the automotive sector climbed 11.3% and exports of the computer, electronics and optical equipment sector rose 11.1%. Domestic sales of the industrial sector were up 2.4%, including a 8.5% increase in manufacturing.

The order stock in parts of the manufacturing sector tracked by KSH was up 10.6% y/y at the end of March.

Hungary's industrial output has risen 30% since 2014, the higest rate among V4 countries and Romania, a state secretary of the Ministry of Innovation and Technology said, adding that the country's investment promotion scheme has played an important role in the expansion of the industry.

K&H Bank attributed the recent acceleration to new capacities added in the manufactuing and forecast industrial growth to reach 5%.

VISEGRAD BLOG: An average working day at the Hungarian parliament

In January-April 2020 Belarus industrial output declined 3.8% year on year as the double whammy of the oil price collapse and the coronavirus stop-shock hit home.

In January-April 2020 Belarus industrial output declined 3.8% year-on-year as the double whammy of the oil price collapse and the coronavirus stop-shock hit home.

Industrial production in Ukraine tumbles by 16.2% year on year in April

A steep reduction in shops’ turnover in April is hardly a surprise, given the fourth month was the first – and only thus far – full month of lockdown, imposed by the authorities to limit the spread of the pandemic.

The economic situation of Czech companies is deteriorating and most hope for an extension of the government's Antivirus support programme, a survey by the Confederation of Industry and Transport shows.