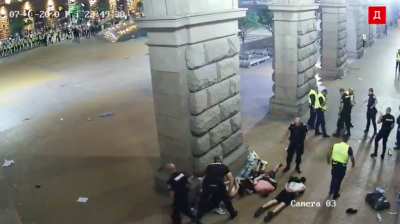 The Bulgarian parliament’s ad hoc committee investigating the actions of the police during the months-long mass anti-government protests in 2020 released on August 13 a video proving the use of excessive force and brutal beating of chained protesters and an alleged harassment of a chained young woman on July 10, 2020.

The protest – one of several that turned violent last summer – has gathered tens of thousands people demanding the resignations of the then government of Boyko Borissov and of chief prosecutor Ivan Geshev over widespread corruption, lack of respect of the rule of law, abuse of office and putting pressure on political opponents.

The video backs up claims made at the time about police brutality. Screened at a committee session and subsequently also released by local media, the video shows policemen hitting protesters with bats, kicking the bodies and heads of chained protesters who are not resisting and are on the ground, forcing them to lie with their faces on the ground, throwing other chained protesters on top of people who seem to be unconscious and dragging a young woman along the ground. After chaining her hands, one policeman stands above the young woman and takes pictures of her breasts. Several protesters had to be admitted to hospital after the beating with two of them having severe traumas and needing surgery and intensive care.

At the time of the protests, dozens of people have testified about these cases of police violence and harassment, and videos showing parts of the beatings, made by protesters, were released on social media.

However, the prosecution concluded there was no evidence of excessive police force and did not raise charges against anyone. Only four policemen have been punished with reprimands.

Nikolay Hadzhigenov, the chairman of the ad hoc committee, said the video had been hidden by the prosecution for over a year.

The video provoked outrage and shock among the population, with many people calling on the institutions to start a thorough investigation and punish everyone responsible for the beatings.

“Those responsible for this brutal event – Mladen Marinov and his successor in the interior ministry Hristo Terziyski [both former interior ministers] who have unscrupulously denied the police violence, are at the moment MPs of [former ruling party] Gerb. … Anger is not the appropriate word for what I am feeling at the moment. There is no appropriate word,” human rights activist Maria Spirova wrote on Facebook.

She added that Bulgaria’s institutions should be restored so that the justice can be done.

Hristo Ivanov, one of the leaders of Democratic Bulgaria, accused Borissov and Geshev of being responsible for the police violence.

“This crime has political guarantors. … The true guarantors and concealers of this severe crime are Borissov and Geshev,” Ivanov said in an interview with public broadcaster BNR.

Parliament speaker Iva Miteva called an extraordinary session on August 17, summoning caretaker Interior Minister Boyko Rashkov to explain what actions his ministry plans to take after the video was released.

The prosecution said on August 15 it was aware of the video and is still investigating the use of police violence.