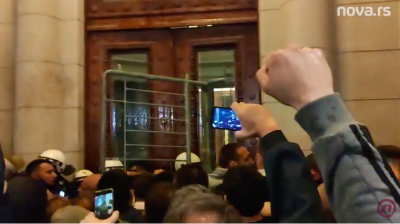 A densely packed crowd of protesters forced their way into the National Assembly building.
By bne IntelliNews July 7, 2020

Thousands of people took to the streets of the Serbian capital Belgrade on the evening of July 3 in protest against the partial return to lockdown announced by President Aleksandar Vucic.

The Serbian government lifted the lockdown at the beginning of May, allowing the general election to go ahead on June 21, but the move appears to have come too soon. Serbia now has a rapidly rising tally of coronavirus infections, with 299 new cases and 13 deaths reported in the 24 hours to July 7, a Ministry of Health statement said.

Angry crowds took to the streets after Vucic announced a weekend curfew and a ban on gatherings of more than five people.

Protesters gathered in front of the government building and shouted “Resignation!” and “Vucic pederu” (an insulting term for a gay man). Some also shouted insults at the police, calling them “Ustasha” — the pro-Nazi regime in Croatia during the Second World War.

Footage from the protest shows a closely packed crowd, many of them not wearing masks.

A large group of protesters forced their way into the parliament building at 10.15pm local time, surging inside until they were forced back by riot police.

Police used teargas on the crowd to disperse them from the steps outside the National Assembly, and there are reports that one policeman was badly beaten by protesters. Protesters also gathered in front of the Radio Television of Serbia building, N1 reported.

The demonstration reflects unhappiness that Serbia could be plunged back into a new lockdown, resulting in economic hardship and job losses.

However, the issue has also become politicised; supporters of the far-right Dveri were among the protesters.

Serbia had one of the world’s strictest coronavirus lockdowns, but almost completely lifted restrictions in May. This allowed Serbia to proceed with the delayed general election that resulted in another landslide for Vucic’s Serbian Progressive Party (SNS) that increased its majority in the parliament. The SNS benefitted from the generally positive view of Vucic and the government’s handling of the pandemic.

From May, life more or less returned to normal: sporting events were allowed to resume including football matches played to tens of thousands of people, as well as the ill-fated Adria Tour tennis championship that was cancelled part-way through when several players tested positive.

However, the spread of the virus has been accelerating for a last couple of weeks, with several hundred cases reported daily for the last week.

According to government officials, hospitals in Belgrade are close to capacity, and there are fears the healthcare system will fail to cope with a further increase in infections.

Field hospitals have been set up by the army in both a concert hall in Belgrade, where a state of emergency has been declared, and near the southern Serbian town of Novi Pazar, the site of another major outbreak.

The government now plans to impose a new weekend curfew likely to last from 6pm on Friday to 5am on Monday, Vucic said on July 7.