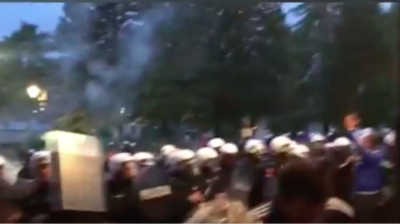 Protests erupted against the inauguration of the new head of the Serbian Orthodox Church in Montenegro on September 5 with the police using tear gas and arresting dozens of people during clashes.

As expected, the inauguration ceremony rocked the already politically unstable country, with supporters of President Milo Djukanovic accusing Prime Minister Zdravko Krivokapic’s government of sacrificing the security of Montenegrins to serve the Serbian Orthodox Church and to help Serbia regain its control over Podgorica.

Montenegro’s population was divided over the inauguration plans in the city, which is seen by some as a threat of Serbian hegemony over the small country.

The police said they were forced to use tear gas after being “exposed to continuous attacks with pyrotechnics, stones and other items that can cause harm”, the police directorate wrote on Twitter.

Two policemen were injured and dozens of people were arrested during the clashes, including Veselin Veljovic, security advisor to Djukanovic. According to a video posted by Deputy Prime Minister Dritan Abazovic on Twitter, Veljovic, who was detained for 72 hours, was part of a group of people who initiated an attack on the police.

On September 4, protesters against the inauguration blocked the between Podgorica and the historic Montenegrin capital of Cetinje, building a barricade of tyres in an attempt to prevent people reaching the city for the inauguration of Metropolitan Bishop Joanikije II. The road had been clogged with traffic all day as thousands of people made their way to Cetinje from other parts of the country.

However, the authorities decided to transport Joanikije and the head of the Serbian Orthodox Church, Patriarch Porfirije, by military helicopter to ensure the inauguration ceremony would be held as planned in the Cetinje Monastery, which is considered to be the historic cradle of Montenegrin statehood.

Tensions escalated on September 4, when Djukanovic arrived in Cetinje to support those opposing the plans to hold the inauguration ceremony in the monastery. Djukanovic said at the end of August that, unless the Serbian Orthodox Church gives up holding the ceremony there, he would personally go to Cetinje and try to prevent the inauguration.

His arrival was seen as support for protesters and was not surprising as Djukanovic’s Democratic Party of Socialists (DPS) took on the Serbian Orthodox Church back in 2019.

Before losing power in August 2020, the DPS tried to rein in the powers of the church with the controversial church law adopted in December 2019, but the law was overturned by the current government.

Montenegro peacefully seceded from its loose union with Serbia in 2006. However, the actions of Djukanovic’s DPS back in 2019 raised tensions between the two countries with the Montenegrin politicians claiming that Belgrade wanted to control Podgorica and establish Serbian hegemony in the country.

Meanwhile, Serbia’s President Aleksandar Vucic hailed the decision of Krivokapic’s government not to delay the inauguration. Krivokapic said on Twitter on September 5 that there had never been a plan to postpone the ceremony.

The situation in Cetinje strengthened relations within the ruling coalition in Montenegro. On September 5, the leaders of the Democratic Front (DF), Andrija Mandic and Milan Knezevic, said they had talks with Krivokapic, who suggested that a “coup plot” was underway in Cetinje.

Two-thirds of Montenegro’s population of around 620,000 is Orthodox Christian and the main church is the Serbian Orthodox Church.