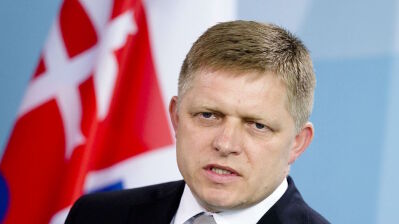 Former Slovak premier Robert Fico will ramp up his campaign against the government and for early elections. / bne IntelliNews
By Robert Anderson in Prague August 29, 2022

Central Europe is facing the prospect of a long hot autumn of discontent as soaring inflation and energy prices wreck hopes of a strong recovery from the coronacrisis. So far there have been few demonstrations but opinion polls show growing unrest and already some weak coalition governments are tottering.

The Czech government is struggling to respond effectively to the cost of living crisis, as it is hidebound by outdated neoliberal ideology and diverted by a corruption scandal inside the STAN party, the second largest in the five-party centre-right coalition. It faces a vote of no-confidence on Wednesday over both the crisis and the scandal, though it should be safe as it has a majority of 108 in the 200-member lower house.

In Hungary there have already been big demonstrations when Viktor Orban’s radical rightwing regime ripped up its manifesto pledges and moved to cut the budget deficit caused by its handouts before the election. Thousands protested in Budapest in July at the end to tax breaks for small entrepreneurs and a hike in utility price caps.

In Poland, the energy crisis has led to a coal shortage ahead of the winter, forcing the radical rightwing Law and Justice party to scramble to come up with measures to shore up its support ahead of the general elections due next autumn.

But the biggest political impact of the cost of living crisis so far has been in Slovakia, where handouts dreamt up by erratic populist Finance Minister Igor Matovic were the final straw for Richard Sulik’s Freedom and Solidarity Party (SaS). Matovic went behind the backs of his rightwing coalition partners in June to push through his plans with the help of opposition neo-Nazi deputies.

This Wednesday a deadline imposed by Sulik for Matovic to resign will expire, and he will pull his party out of the government.  Prime Minister Eduard Heger will lose his majority, raising the risk of early elections and the potential return to power of former premier Robert Fico.

Insiders and experts consulted by bne IntelliNews gave virtually no chance for the coalition to be saved. Matovic, leader of the Ordinary People and Personalities (OLaNO) movement, seems insouciant – he is currently holidaying in Spain. For his part, the prickly Sulik clearly detests him and is no mood to back down.

This means the government will now in reality be a tandem of two personal populist parties, Matovic’s anti-corruption movement OLaNO, and Boris Kollar’s radical rightwing force, We are Family, which sits with Marine Le Pen’s National Rally in the European Parliament.

Matovic’s impulsive style of leadership already cost him the premiership in March 2021 – when SaS objected to his personal mission to secure the Russian Sputnik COVID-19 vaccine – and now it has cost the government its majority. The common factor is the OLaNO leader’s impulsive and erratic performance as minister and his failure to consult coalition colleagues before he announces decisions, often on social media.

The SaS has pledged to support the government when it continues to follow the programme it signed up to, but Matovic will struggle to push through his 2023 budget, given that it contains items that SaS has objected to.

“It would be a big failure of the ruling coalition if the budget does not pass,” says veteran political commentator Gregorij Meseznikov of the IVO think-tank. “This will be a dramatic test of the sustainability of the government.”

A failure would mean that the government will have to continue to use the 2022 budget, storing up problems for the future. According to the country’s Law on Budgetary Responsibility, the budget should be balanced in 2024, something that now looks all but impossible.

Given the loss of its majority and its now purely populist bent, the government will also continue to struggle to make a coherent response to the cost of living crisis. It could again seek support from the neo-Nazi LSNS deputies, but this would likely cause more of its own MPs to leave to become independents.

Meanwhile the opposition leftwing parties of former premier Fico and his onetime ally Peter Pellegrini will ramp up their campaigns against the government and for early elections. “They have voters who are more sensitive to bread and butter issues  and they will be the beneficiaries [of this cost of living crisis],” says Meseznikov.

All this should make snap elections much more likely, but this is very hard to organise in Slovakia.  Previous snap elections have been held by securing a three-fifths majority in parliament for a special bill, but the constitutional court has recently ruled out this procedure, Andrias Turso of Teneo consulting firm pointed out in a note last week.

Therefore Slovakia could face not just an autumn of discontent but 18 months of political chaos before the scheduled general elections in February 2024, at a time when the country faces the cost of living crisis and perhaps growing fatigue with the cost of supporting neighbouring Ukraine against Vladimir Putin’s aggression.

“There will be a period of friction, depression, rage,” Martin Barto, a member of SaS’ National Council, told bne IntelliNews. “There is a real threat of a really big political upheaval.”

VISEGRAD BLOG: Czechs are still in denial about communist rule