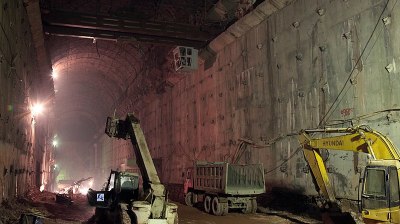 Any threat to the Roghun hydropower dam project (seen here under construction) would deal a huge blow to Tajikistan.
By Kanat Shaku in Almaty August 6, 2020

Tajikistan’s sovereign profile has weakened more significantly than would be expected from a “standard 2020 narrative” for a small, remittances-based economy, according to a note to investors from VTB Capital, the analytical arm of Russian investment firm VTB Group. The impact of this would be felt by the Tajik eurobond issued in 2017, “TAJIKI bond”, it added.

VTB argued that there were three building blocks underlying its view, including hydrology issues; the evolving energy situation in Pakistan; and the ‘no new commercial debt’ commitment. The three factors add to the already complicated situation with the construction of the huge Roghun hydropower dam. The bond was originally issued to finance part of that construction. Tajikistan raised $500mn from the bond issuance in 2017, which priced at 7.125%.

“Together with the rest of the market, the TAJIKI bond has by now fully pared the losses from the March selloff,” the VTB Capital noted. “As elsewhere, this run-up in prices was driven exclusively by the marked turnaround in risk tolerance, rather than a reassessment of the underlying risk.”

The hydrology issues involve a significant reduction in the amount of rainfall versus the climatic norm in Tajikistan’s Pamir mountains from late 2019 to early 2020. Rainfall is also a good gauge of the overall volume of moisture that reaches the deeply continental area, where the hydropower dam is being constructed, and helps the glaciers keep to their regular rhythm. Over the first half of 2020, the area saw less than half of the multi-year precipitation average.

Energy rather than irrigation

Since the river water management is focused on energy, rather than irrigation, the country cannot afford to save all of the winter season’s moisture. Such necessary ‘outflows’ led to the reservoirs becoming shallow and water levels in Nurek, the largest reservoir, were 17 metres below the norm lately. Exports of energy to neighbouring Uzbekistan and Afghanistan were recently curtailed by Tajikistan due to this reality and in late July the government urged the population to prepare for possible blackouts at home.

Uzbekistan and Afghanistan have already turned to Turkmenistan for its thermal energy generation alternative, which will likely leave a mark on Tajikistan’s negotiations with Pakistan. Pakistan’s position on the Tajikistan-led CASA-1000 electricity transmission project is seen as a cornerstone for the economic viability of the Roghun project, VTB noted.

“It is remarkable how the visible progress of, and generation of newsflow related to, the CASA-1000 transmission line has slowed down in the last couple of years,” the agency said. “That the project had moved past the fanfare stage and into the actual earth-digging (or, more often, stone-crushing) phase is only a part of the explanation. Another is due to the changing circumstances of Pakistan’s energy sector and the resulting revision of its import strategy.”

Pakistan’s “interest in the project was predicated on the expectation that this would make it feasible – not only technically but, more importantly, financially – to ramp up [its own] new capacity which, in turn, would make [Pakistan] fully self-sufficient, including in winter energy, and hence energy-independent,” VTB added. “Neither Tajikistan nor [the second CASA-1000 participant] Kyrgyzstan intended to receive a reverse flow of any prominent volume, especially if the guaranteed volumes summer price tag that Pakistan is to pay becomes a starting point for price bargaining about reciprocal deliveries.”

Pakistan is also looking for an asymmetric distribution of security-related risks for the reliability of the power transit via Afghanistan.

“It has to be the Tajiki partners who bear these risks. It is these complications, as far as we understand, that keep delaying – or are being strategically used by one of the parties to delay – the signing of the power purchase agreement,” VTB posited.

“The definitive power purchase agreement, in its turn, is a prerequisite for Tajikistan to be able to raise the requisite financing for Roghun,” the agency continued. “The IFIs, as we explained before, are just not willing to participate in that project, seeing it as a financial overstretch. It was expected by the investor community over 2018-19 that a Fund programme would be finalized soon, and that although the IFIs would continue to deny financing for Roghun itself, they would make some meaningful room for any possible third-party money. These expectations have been made futile by the pandemic, and the need to respond to it, that necessitated a new emergency programme with the Fund.”

VTB expected that both the ADB and EFSD would step in with greater involvement later this year and noted that the IMF has just written down some $11mn from CCRT for Tajikistan, but said it believed that none of these measures would be directly usable to Roghun. “Only two turbines have been ready for installation after two decades of mothballing at the site, and hence procurement, production, delivery and installation of the other four will require fresh financing,” it said.

The Tajik election—Stick not twist for Moscow

Disasters in the making
The Tajik election—Stick not twist for Moscow
COMMENT: Why Belarus is exceptional