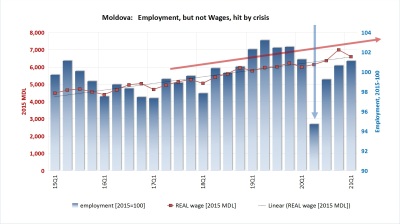 While the crisis visibly depressed the number of jobs in Moldova last year, particularly in the second quarter, the average wage — the lowest in the region — continued to increase and posted a robust 10.9% annual advance in the first quarter of 2021.

The moderate inflation (+0.8% y/y) eroded only a small part of the wage gain, resulting in a 10% real advance in the quarter.

The developments were highly uneven among sectors both in terms of employment and earnings.

The wages in IT&C were more than twice the average (235%) and the earnings in the financial sector were 82% above average, at the upper end of the scale, while those in hotels, restaurant and cafes (HoReCa) were 40% below average while the wages in constructions and education (pretty similar in absolute terms) lagged by 16% below average.

The wages in the healthcare system rose by 50% y/y in Q1 and were 26% above average in Q1. The wages in IT&C and financial services rose slightly above average, by over 12% y/y. In HoReCa and transport wages decreased in Q1 compared to the same period of 2020, and even here the declines were smaller than 1% y/y.

The overall employment in Q1 returned close to the same period of 2020 (-0.2%), but some sectors performed much better than others.

Employment in construction and IT&C increased by 12% y/y while the HoReCa sector made one-fifth of its workforce redundant, explained perhaps by the informal employment in the sector.