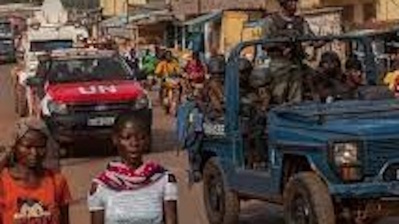 The Russian-backed Wagner Group has begun pulling dozens of mercenaries out of the Central African Republic (CAR) to send to Eastern Europe where Russian forces are threatening Ukraine, The Daily Beast reports.

Wagner Group, which first gained international notoriety in Ukraine at the height of the 2014 incursion when accused of war crimes, has deployed more than 1,100 Russians to the CAR. In Africa, its fighters are also involved in Libya, Sudan, Mozambique and Mali.

Unprecedented numbers of Wagner mercenaries in the CAR – where they have also been accused of human rights violations – left for Eastern Europe in January, and more are set to join them in the coming weeks, two local senior military officers told The Daily Beast.

“Usually when we hear that some have left, we find out that they are just a handful – sometimes five or six people within a month,” an officer, who works at the military headquarters in the CAR capital, Bangui, is quoted as saying. “It’s the first time we are hearing that dozens have departed in a month.”

Russia says it has some 1,100 unarmed military trainers in the CAR, part of a deal Moscow signed with Bangui in 2018. Other sources say the Wagner Group has up to 3,000 armed fighters in the country.

One man recently detained by Wagner Group forces told The Daily Beast that he had overheard CAR troops in the camp where he was being held describe a sudden exodus of mercenary fighters – heading directly to Ukraine.

This is the first time the Russians have left in large numbers since Wagner mercenaries arrived in CAR at the request of the government more than four years ago, according to a military official, who said the mercenaries that have departed had come from Russia, Ukraine and Belarus and are returning to where they came from.

“We have specifically been told by their supervisors that about 20 Russians departed this January for Eastern Europe,” another official, who works closely with the Russians, told The Daily Beast privately. “What we understand is that the Russians who’ve left, and those who will leave later on, are doing so as part of their assignment rotation policy and that they would be replaced in due course.”

The Kremlin denies that the Wagner Group has any links to the Russian government. But it has in the past re-deployed forces from combat zones, including in Africa, in line with Russian President Vladimir Putin’s foreign policy objectives.

An investigation by Bellingcat published in November 2021 found that more than 200 Russians had been sent from hotspots where the Wagner Group was deployed, including the CAR, to Belarus in a bid to destabilise the country ahead of presidential elections held in August 2020.