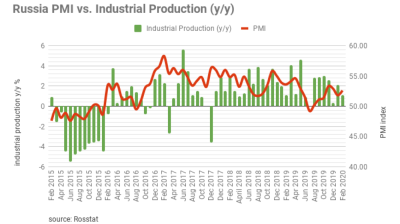 As reported by bne IntelliNews, at the end of 2019 Manufacturing PMI (Purchasing Managers Index) continued to underperform as the real economy splutters in the face of stagnation and manufacturing fails to gather any momentum.

Notably, the performance in January was hurt by warm weather, with lower natural gas output and heat generation being the main drivers of the slowdown of industrial output. Previous reports warned that wam weather could some of the Russian utility names.

In January mining/extraction was down by -0.4% y/y and utilities dived -4.7% y/y, while the manufacturing surprised with 4% growth. Another drag on output was the automotive sector, showing 12.3% y/y decline in gross output.

“However, output in all other key segments of Russian industry remained positive, with significant increases in production posted in food processing, machinery and electronics,” BCS Global Markets commented on February 18.

The analysts also note that the production of construction materials started to grow – a sign that the slump in demand for new housing might finally be coming to an end.

Going forward, BCS GM expects a boost in public spending and stabilization of consumer demand to boost industry. The slowdown in industrial output in January is not sees as dramatic as the month of January is the least representative for macro dynamics due
to the long holiday period and peaking seasonality.

BCS GM reiterates the 2020 forecast for industrial production at 3.8% y/y (latest official forecast and consensus both put industrial growth estimates for this year at 2.3%). In January’s report Rosstat has raised that gross industrial production estimate for 2018 to 3.5% y/y from 2.9%, but for 2019 it was essentially left unchanged (2.3% v 2.4% previously).

The calm before the storm: Russia’s March PMI manufacturing index shows only a mild decline
Moscow locked down as coronavirus infections in Russia accelerate
Russia's National Welfare Fund steps up again to $157.2bn, or 11% of GDP, in March

Balkans have some of the world’s strictest anti-coronavirus measures
1 day ago
Ukraine's Economics Ministry forecasts 3.9% economic contraction in 2020
2 days ago
Russia's National Welfare Fund steps up again to $157.2bn, or 11% of GDP, in March
5 days ago
Small countries in Balkans and South Caucasus most exposed to tourism industry collapse
6 days ago
Capital Economics slashes CEE growth forecasts for 2020 to -2% y/y
7 days ago