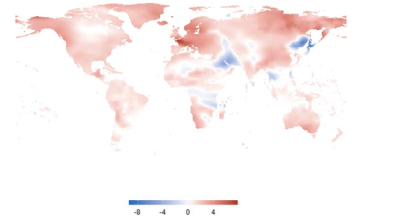 Projection of the change in the average of daily temperature maxima between 2020 and 2099 under the most extreme scenario.
By bne IntelliNews September 16, 2020

An increase in the average annual temperature will have a predominantly positive impact on the Czech economy, a recent study of the economics of climate change by Deloitte showed. In the warmest scenario, Czech GDP is projected to see an increase of 0.44% by 2050. Agriculture would be the only negatively impacted sector.

Deloitte’s calculations of the influence of climatic changes on the Czech economy were based on four most commonly considered scenarios for the evolution of climatic conditions as outlined by the International Panel on Climate Change. In case of the Czech economy, positive economic impacts should prevail in all these scenarios.

"Climate change has far-reaching adverse effects on natural systems and human society. At the economic level, climate change primarily affects agricultural production. However, the impact is and will be felt in a number of other sectors, such as transport, energy, tourism or construction," said a co-author of the study and chief economist of Deloitte David Marek, as quoted by the Czech News Agency.

In the mildest scenario, Czech GDP per capita by the end of 2050 is expected to be 0.26% higher as a result of climate change compared to today's climate conditions, while in the warmest scenario, it would increase by 0.44%.

By 2096, in case of the warmest scenario, the increase of Czech GDP per capita would amount to 1.1% compared to current conditions.

The billionaires club, where the mega-wealthy go to meet each other

Growing number of governments consider second lockdowns to tackle autumn COVID-19 wave
The billionaires club, where the mega-wealthy go to meet each other
CEZ approves sale of Romanian assets to Macquarie