Was Tajik leader’s rant at Putin defiance or a plea for greater dependence? 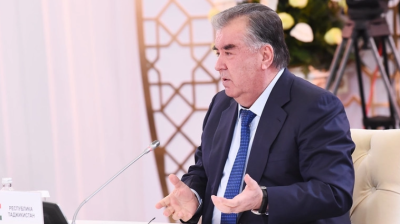 R-E-S-P-E-C-T Find out what it means to me: Rahmon talking at the Astana summit on October 14. / Tajikistan presidential administration
By Eurasianet October 18, 2022

Footage of Tajikistan’s president ranting at Russian leader Vladimir Putin during a Central Asia-focused summit last week has gone around the world and been held up as evidence of Moscow’s weakening grip over its strategic vassals.

Analysts are cautioning, however, against that reading of the seemingly unscripted and off-the-cuff tirade on October 14 in which Emomali Rahmon demanded “respect” from Russia.

The Tajik president was not demanding that Russia be less interfering, they argue. On the contrary, he wants Moscow to commit more – in monetary terms, to be exact – to countries like his own. That outcome would see an increase in dependence, not a dilution of it.

Rahmon’s speech, delivered without notes, was an often incoherent ramble of recriminations, aimed at no one partner in particular.

He opened by complaining about the 5+1 format increasingly favoured by nations seeking to engage with Central Asia as a collective, rather than one on one.

The implied rebuke, as Rahmon stated a few moments later, is that countries in his region are being treated as a broad collective instead of individual sovereign entities. In doing that, he argued, Russia was repeating the errors of the Soviet Union.

“You’ll have to forgive me for saying this, but then as now, no attention is being paid to the small republics, the small countries,” he said.

For Jennifer Murtazashvili, a professor at the University of Pittsburgh, these kinds of remarks showed that Rahmon was not making an “emphatic statement of autonomy, but [delivering] a plea for more Russian attention.”

Another interpretation of this passage of Rahmon’s peroration was that he favours the bilateral style of pragmatic engagement that Moscow has heretofore favoured with some of its Central Asian partners.

Zamira Dildorbekova, a scholar at the Institute of Ismaili Studies, wrote on her Twitter account that Rahmon was attempting to not “only reassert his [political] loyalty to Russia as the only ‘viable strategic partner,’ but to assert [the] centrality of Tajikistan in Central Asia as a strategic economic partner.”

In passages of his ramble, Rahmon complained that Tajikistan was not getting enough interest from investors, even when compared to neighbouring countries. This too is a mistake repeated from Soviet times, he said.

“We have these business forums … and please colleagues, don’t be offended,” he said, addressing the other Central Asian leaders around the table. “We have them in Astana, in Tashkent, like used to happen in the Soviet Union… With other republics, it’s just ‘give us milk, give us cotton, and give us this, and give us that.’”

Moscow’s isolation could therefore prove a boon for partners that have felt neglected or exploited purely for its manpower and raw resources.

“[Rahmon] understands Russia has fewer friends now and Tajikistan is among them,” Mirzokhid Karshiev, a doctoral researcher at University of Helsinki, wrote on Twitter. “He's probably unhappy with Russia working with [Central Asia] as a region, this makes him less flexible with its neighbours. In that regard, he's advocating ‘divide and rule,’ which apparently serves his personal interests.”

The Tajik leader volunteered numerous ways in which his country remains umbilically linked to Moscow: the Russian military base where thousands of troops are stationed; the millions of Tajiks that go to Russia for work, study and even medical treatment; the millions of children in Tajikistan that still learn Russian at school.

On that last point, Rahmon made an undisguised plea for help.

“We have 2.5mn schoolchildren [studying Russian], and they don’t have enough textbooks,” he said.

As it happens, five Russian-language schools built on Moscow’s dime opened this school year alone. Putin even attended the opening ceremony for one of the schools via video link.

Temur Umarov, a fellow at Carnegie Politika, wrote on his Twitter account that with Russia so diplomatically isolated, Tajikistan is a prime position to extort concessions, and has already done so, in fact. By way of examples, Umarov pointed to the Russian Supreme Court’s recent decision to designate a banned opposition party from Tajikistan as a terrorist organisation and the constant deportation of Russia-based Tajik political activists.

“The concessions made by [Russia] are not enough for [Tajikistan]. Rahmon wants to play his card right. To this point, he invested a lot to keep [Russian] influence high in [Tajikistan] and did much less than other [Central Asian] states to diversify its ties [with] partners besides Russia. Now, Rahmon wants to be rewarded,” Umarov wrote.