Was Tikhanovskaya forced to record her message to respect the official election results and end the protests in the office of the head of the Central Election Commission? 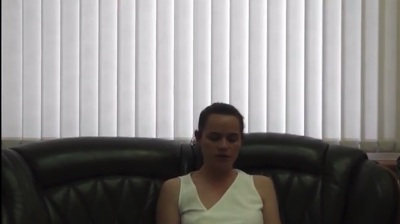 The room where presidential candidate Svetlana Tikhanovskaya recorded her message calling on Belarusians to accept the official election result and end the protests looks exactly the same as that of the head of the Central Election Commission Lidia Yermoshina
By Ben Aris in Berlin August 13, 2020

Was housewife and nominal victor in Belarus’ presidential election Svetlana Tikhanovskaya forced to film a video clip, calling on Belarusians to respect the official results of the August 9 elections and end the protests, in the office of Central Election Commission (CEC) chief Lidia Yermoshina?

Tikhanovskaya has more of less taken herself out of the game after calling for an end to the protests and fleeing the country for Lithuania. There she made a second clip released on social media where she apologised and said: “some will forgive me, some will hate me.” The first clip was released on state TV.

The official count gave the incumbent a crushing victory with over 80% of the vote, while his rival Tikhanovskaya took only 10%.

The trouble is, two dozen commissionaires of polling stations rebelled and released the actual vote tallies that showed Tikhanovskaya beat Lukashenko in a landslide victory, taking circa 60% of the vote to Lukashenko’s circa 10-15% – almost the exact mirror image of the official result.

But Lukashenko is simply refusing to step aside and has unleashed the police and security forces to bludgeon the population into submission. And that is not all. Lukashenko has rolled out the full panoply of a dictator’s tools to crush the revolt. The internet gets turned off every night at about 7pm when the demonstrations are slated to begin. Workers at various state-owned factories that went on strike on August 11 were simply arrested. Those brave commissionaires that published the real elections results are being browbeaten (and probably physically beaten too) into recanting and re-publishing the “corrected” results on Facebook, according to reports.

But perhaps most telling of all is Tikhanovskaya herself, who appears to have been coerced into stepping back and conceding victory in the elections to Lukashenko.

Perhaps foolishly, Tikhanovskaya went into the CEC offices on August 10 to file a formal complaint of vote-rigging and start a legal case to force a recount.

In an interview with Meduza, Maria Kolesnikova, one of the three women that fought the election to have Tikhanovskaya elected president, said she last saw Tikhanovskaya walking into the CEC’s office in Minsk, escorted by three men (apparently police officers) carrying video equipment.

“I didn’t see her again — I only saw, like everyone else, her video message,” says Kolesnikova, explaining that Tikhanovskaya went to the Central Election Commission to file a formal challenge against Sunday’s official election results.

“I saw the complaint on the desk in Commissioner Lidia Yermoshina’s office, but I don’t know what happened to this sheet of paper,” Kolesnikova says.

From what we can make out from the reports and social media chatter surrounding the visit, what followed was that she ended up in the offices of the head of the CEC, Lidia Yermoshina, for about three hours.

One can only speculate what was said in that meeting, but results were dramatic. Tikhanovskaya went there to file a formal complaint but by the end of the same day she had left the country and the state TV was broadcasting her message calling for an end to the protests.

Her team say she was forced to leave. Her campaign manager Maria Moroz has been detained and Tikhanovskaya leaving the country was a condition of Moroz's release, according to comments from the Tikhanovskaya team. And tellingly, Tikhanovskaya’s husband Sergey remains in the KGB pre-trial detention facility where he has been reportedly held in solitary confinement and poorly treated, giving Lukashenko considerable leverage over the family.

It appears highly likely that while in Yermoshina's office she was threatened by state security services with the arrest and jailing of her fellow campaigners as well as threats against her husband at a minimum. She was also forced to read a statement calling for the end to the protests, which was filmed by those agents and then broadcast.

This version remains speculative, but Belarus’ KGB has well known form on this count. During the election campaign women from the team went on the record claiming security forces had threatened to take their children away and even rape them during visits to their homes. Indeed, both Tikhanovskaya and her co-campaigner Veronika Tsepkalo sent their children out of the country for safety during the campaign, precisely because they had received similar threats.

There is no proof that the video was shot in Yermoshina’s office but all the circumstantial evidence points to that conclusion. A comparison of Tikhanovskaya’s clip and photos of Yermoshina being interviewed in her office appear to be in very similar rooms; both have the same stuffed leather sofas (which are not identical, but there could be more than one) and the blinds and wooden windowsills are the same. 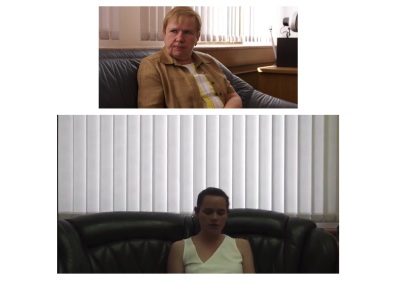 More generally, the production values of Tikhanovskaya make it very suspect. One of the remarkable things about her campaign is how good the design and AV production has been.

Everything from the three hand sign icon to the polished and profession messages and campaign video have added to Tikhanovskaya's momentum and have helped give it popular appeal.

That stands in stark contrast to this clip, possibly the most important in the whole campaign. It is filmed with a window with strong natural sunlight behind her, a basic video production mistake. The composition has far too much space above her head, another basic mistake any video editor will tell you. And she delivers her message looking down reading from a piece of paper, which stands in contrast to all the other messages which were clearly rehearsed and delivered with energy. Everything about this video is wrong. Or exactly what you would suspect when a member of the KGB has told you they will arrest your friends, keep your husband in jail forever and worse unless you read what is on this bit of paper.

The shift is motivated in part by energy considerations and in part by nationalist politics.

Lack of commitment to the rule of law and judicial reform are causing consternation, while the increasingly politically motivated actions of recently appointed General Prosecutor Iryna Venedyktova are raising tensions.

A new growth area in a clean new world

Hungary-based producer of anti-bacterial coatings Resysten was doing respectably well before the coronavirus pandemic caused demand for its product to explode.

Russia to vote in 83 regional elections

Russia goes to the polls this weekend for important regional elections in 83 regions where the Kremlin will face a challenge due to the sinking popularity of the ruling United Russia Party.

A group of international doctors have written to the British medical magazine The Lancet raising questions about the veracity of data presented in a recent paper that showed Russia's Sputnik V vaccine was “100% effective” in Phase II trials.