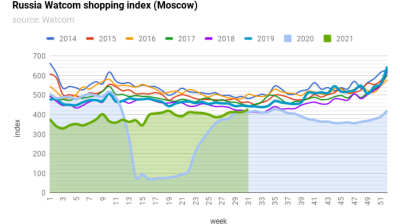 The Watcom Shopping index has increased to almost the level of 2019, the last normal year before the pandemic struck.
By bne IntelliNews August 11, 2021

The Watcom Shopping index that measures foot traffic in Moscow’s leading malls in real time, overtook the 2020 level of activity in week 30 of this year as the retail business recovers on the back of the post-crisis economic growth and rising real income that have gone back in the black of the first time in seven years.

As the chart shows, foot traffic in the top malls that are frequented by Moscow’s affluent middle class plunged last year after the lockdowns were imposed by Moscow mayor Sergei Sobyanin in April as the epidemic exploded in Russia. However, once the restrictions were removed at the end of the summer foot traffic rapidly made back almost all the ground lost before fading again in the forth quarter as a second wave of infections hit the country.

This year foot traffic has remains relatively consistent, but slowly returning to its pre-pandemic levels at the end of July. By week 31 the index was still below the 2019 level of 443 by 3.6%, but poised to match it. In the worst of the crisis foot traffic was down by at least 25% in the lockdown period as Muscovites were banned from visiting any store more than 200m from their house and most people moved to buying essentials online.

However, even the improved index value in week 31 of 427 remains well below previous years. Foot traffic in week 31 peaked in 2016 to reach 503 as the economy in that year recovered from the previous crisis in 2014 that saw oil prices collapse and the value of the ruble plunge.

At the same time the shopping index has been falling slowly part from the constant string of crises thanks to the rapid growth of e-commerce in Russia that is growing five times faster than the real economy and eating into the revenue share of bricks and mortar retailers.

The bounce back is partly driven by rising real incomes that is being driven by companies improving profitably thanks to the recovery. As bne IntelliNews as reported Russian firms are currently enjoying their best profits in five years. Incomes are expected to continue to rise as the government rolls out massive spending on its 12 national projects this year that boosted incomes briefly in the last quarter of 2019 before the annus horribilis of 2020 got underway.

Real disposable income in Russia in 2Q21 increased by 6.8% year on year after a 3.7% decline seen in 1Q21, according to the latest data from RosStat statistics agency.

Alfa Bank's chief economist Natalia Orlova commented to RBC business portal that high inflation has kept real income dynamics from posting an even faster recovery in 2Q21. However, as compared to pre-coronavirus (COVID-19) 2Q19, real disposable income would still be lower by 0.8% in 2Q21, albeit improving from -1.9% in the previous quarter, VTB Capital (VTBC) commented.

Rising incomes has fed through into growing retail sales in general.

And economists report that the official numbers are probably underestimating the recovery as household demand is currently at its highest level in years.

Consumption this year has been strengthened by the fact that net household savings have been very low compared to last year's recession as well as in 2019. At the same time net household borrowing from banks has increased in recent months to the point where the Central Bank of Russia (CBR) is getting worried about a consumer credit bubble forming.

Wholesale trade has also recovered at the pace of 10% more in the second quarter than two years earlier and housing prices have also been rising in another “feel-good” indicator.

For the first 10 months of the year, Geostat estimates an average growth rate of 10.5%.