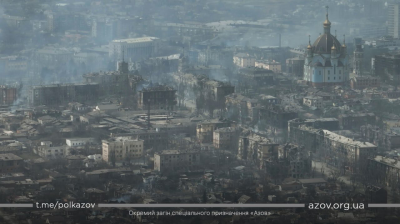 Russia's intensive bombardment of Severodonetsk in the Luhansk region is creating a "new Mariupol" warns Kyiv. / wiki
By Meduza May 26, 2022

Since mid-April, Russia has focused its invasion of Ukraine on capturing the eastern region known as the Donbas. According to military reports, the fighting here has been largely positional battles without significant advancements by either side. Both Russia and Ukraine have built up their forces, regrouped and maintained artillery fire. In the last week, however, statements by officials in Kyiv have become more alarming, as if Ukraine’s leadership is preparing the nation for a major defeat: the loss of Severodonetsk (one of the last big cities in the region still under Ukrainian control) and a “new Mariupol.”

Ukrainian President Volodymyr Zelenskiy says the situation at the front lines in the Donbas is dire. “Bakhmut, Popasna, Severodonetsk – it’s in these directions that the occupiers have concentrated their efforts. They’re slaughtering people there and trying to destroy all life. No one has ever caused so much damage to the Donbas as Russian soldiers are inflicting right now,” Zelenskiy said, summarising the 89th day of the war. “Russia has effectively thrown the entire remaining might of its army at this offensive,” he added the next day.

Presidential adviser Oleksiy Arestovych has described the course of the war even more grimly, warning that the Russian military has outpaced Ukraine’s Armed Forces. “The Russian side managed to build up its reserves sooner,” he told Mark Feygin in a YouTube broadcast on May 25, detailing Russia’s apparent plans to create “a new Mariupol” by encircling Ukraine’s troops in the Donbas:

“They’re trying to break through here, from Vrubivka, and to cut off the road in the area of Berestove. That’s one of the main goals – to disrupt the supply links between Bakhmut and Lysychansk. If you look at Siversk, you’ll see a little ‘pocket’ along the railway that they’re trying to close, from Siversk to Berestove. So there’s a little ‘pocket’ forming, which Yampil, Siversk, Popasna, Vrubivka… And they’re closing it, and Lysychansk and Severodonetsk remain surrounded. That’s their main goal right now – to create a ‘new Mariupol.’

“Continuous artillery and air strikes, almost non-stop ground attacks by the enemy. They have superiority in artillery and aviation. To put it mildly, we’re barely afloat.”

In addition to the encirclement of the Donbas, Arestovych also predicts that Russia will increase its pressure along the Kherson-Zaporizhia line, north of Crimea. Further north, Russia could even mount another assault on Kyiv itself. Vadim Skibitsky, the spokesman for Ukraine’s Intelligence Main Directorate, has corroborated these concerns, saying that Russia is moving troops from Crimea to the Kherson region and occupied parts of Zaporizhia. “They’re preparing the necessary engineering structures and planning not just one or two but three lines of defence. It’s these military indicators that suggest Russia’s intentions to seize and hold these territories,” explained Skibitsky.

The city of Severodonetsk (which became the Luhansk region’s administrative centre after the self-proclaimed Luhansk People’s Republic captured the city of Luhansk) isn’t yet surrounded, but it’s under constant artillery fire, like the highway between Bakhmut and Lysychansk, according to Luhansk Governor Serhiy Haidai. There are currently around 12,500 people still in the city, and 90% of all housing is damaged or destroyed, according to Mayor Oleksandr Stryuk.

Separatist officials claim to have advanced further, however. LNR militia spokesman Andrey Marochko says Lysychansk and Severodonetsk are now under “operational encirclement” and besieged on three sides. Russia’s Defence Ministry, meanwhile, has not reported any major breakthroughs in the Donbas.

In an interview with Ukrayinska Pravda, the commander of Ukraine’s “Svoboda” volunteer battalion, Petro Kuzyk, said Russian troops likely plan to capture Severodonetsk by the same means they used to take the city of Rubizhne in mid-May, essentially by wiping it off the face of the Earth with a constant barrage of artillery. “On average,” explained Kuzyk, “they fire between 20 and 50 shots for every one of our shells”:

“They hammer our positions with artillery, and their infantry advances under artillery cover, sometimes together with tanks. As a rule, their infantry suffers losses, retreats and then the artillery goes back to work, before another two or three infantry assaults.

“Using these massive artillery bombardments, the Russians are able to advance, since they are destroying our positions, our trenches and our buildings, step by step… And they’re under orders to level Ukrainian cities.”

In chorus with other Ukrainian officials, Petro Kuzyk calls on the West to provide additional technical support to Ukraine’s Armed Forces, especially artillery systems, multiple rocket launchers, air defence systems, tanks and fighter jets. Without more parity on the battlefield, Russians will likely surround Ukraine’s troops in the area, warns Kuzyk. “At best, our men will retreat and look for new fortifications… It’s a mistake to rely solely on the heroism of soldiers,” he warned.

As Ukraine’s problems mount at the frontlines, some politicians and observers in the West have suggested that Kyiv should consider making territorial concessions to Moscow in order to hasten the war’s end.

President Zelenskiy has condemned these proposals, accusing figures like Henry Kissinger of ignoring Ukrainians for the sake of appeasing the Kremlin. “The ‘great geopoliticians’ advising Ukraine to surrender something to Russia never want to see ordinary people – ordinary Ukrainians,” said Zelenskiy. “We must do everything possible to cultivate the habit of taking Ukraine into account, so Ukrainians’ interests aren’t drowned out by the interests of those hurrying to their next meeting with a dictator.”

Oleksiy Arestovych responded even more harshly: “Russia just needs the Zaporizhia and Kherson regions – no big deal! Then we can have a new peace settlement in Europe, and the Ukrainians will just have to ‘curb their appetites.’ We’ll build a comprehensive peace in Europe on this foundation. Business as usual,” he explained in a YouTube broadcast on May 25, before telling everyone who endorses such ideas: “Go fuck yourselves, you dumbfucks, with these fucking plans.”

This article first appeared in Meduza here and is published under the CC 4.0 licence. Translation of Meduza’s story by Kevin Rothrock