Weekend of protests against corona restrictions in Southeast Europe 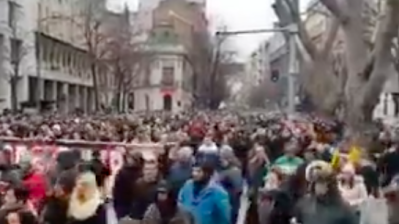 Protests by anti-lockdown activists and anti-vaxxers took place in cities across Southeast Europe on March 20, as restrictions were tightened in response to the latest wave of the pandemic.

Thousands of people in total gathered in several Croatian cites, as well as Belgrade, Bucharest and Podgorica.

In Croatia, people went out to protest in five towns on March 20 against the restrictions with main demand being to be allowed to stop wearing face masks, N1 reported. Restrictions in Croatia are currently relatively light compared to some other countries in the region due to the more favourable epidemiological situation.

The protests, organised by the Rights and Freedoms initiative, were held in Zagreb, Dubrovnik, Split, Sibenik and Osijek, joining the World march for freedom, peace and democracy held in around 40 countries on the same day.

The protests aimed to highlight the role of people in decision-making, encouraging citizens to act and create a medium for educating citizens about their constitutionally guaranteed rights and freedoms.

Protesters claim the restrictions imposed by the authorities to contain the spread of coronavirus were authoritarian and did more harm than good.

Two separate protests — one organised by catering company owners and employees worried about their livelihoods, the other by anti-vaxxers — were held in the Serbian capital Belgrade, later joining up to voice their opposition to the government’s handling of the pandemic, as reported by local media.

Footage from the protests show large groups of people gathered in central Belgrade, many of them without masks. While some of the banners concerned the pandemic, others railed against Kosovo’s independence from Serbia, migration and the Belgrade Waterfront development; some of the speakers insulted the LGBTQ community and criticised mining company Rio Tinto’s Jadar lithium project in Serbia, reported RFE/RL.

In neighbouring Romania, newswires reported that over 1,000 anti-vaccination protesters turned out in Bucharest, which has also seen a sharp upturn in COVID-19 cases.

In Podgorica, around 100 people gathered to protest against the restrictions, which the authorities have been tightening constantly as the country is struggling to deal with the spread of coronavirus and its health system has nearly reached its full capacity to take care of patients.

The protesters claimed that the latest restrictions would harm the economy instead of improving the health situation.

Meanwhile, dozens of Montenegrins went out in their cars in several towns on March 20 to protest but their demands were unclear and apparently not related to the coronavirus situation.

“Our sky, our land, our language, our people. Stop chasing free people,” the organisers of the protest – a group of citizens who have not associated themselves with political parties – said in the call for protest, RTCG reported.

This followed a bus protest organised by local transport companies in Podgorica.

Kyrgyzstan hits Canadian gold mine operator with $3.1bn fine and unveils law on state takeovers of companies
8 hours ago
ECHR deals big blow to Polish government-dominated top court
19 hours ago
Germany deal to buy Sputnik V dead, but India to receive 360mn doses
19 hours ago
Lukashenko signs decree on the transfer of power in the event of his death
19 hours ago
Amnesty International restores Navalny’s Prisoner of Conscience status
1 day ago