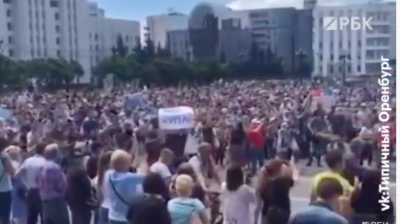 Residents of the Russian far eastern city of Khabarovsk took to the streets for a second day on July 12, after governor Sergei Furgal was detained on murder charges.

The previous day at least 10,000 people took part in a massive protest — the biggest ever in the city of around 618,000 people — that appeared to reflect anti-Kremlin sentiment as well as support for Furgal.

Police estimated turnout at 10,000 people on Saturday but opposition leader Alexei Navalny said up to 40,000 people had taken part, according to newswire reports.

Protesters marched through the city close to the Chinese border and around 200km from Russia’s east coast, shouting “Freedom” and calling on Russian President Vladimir Putin to resign.

Police allowed the protest to go ahead even though it was not authorised. Footage from the event shows huge crowds, some wearing masks but with little social distancing.

On July 12 local media estimated the crowd was considerably smaller, though still several thousand-strong. People marched through the city then gathered outside the regional government building demanding an open trial for the governor. There was also a motor rally through the city, RBC reported.

According to local dvhab.ru, four people were detained at the unauthorised rally.

Furgal, the candidate of the ultra-nationalist Liberal Democratic Party, scored a landslide in the 2018 election, roundly defeating the ruling United Russia party’s candidate. This was part of a wave of protest votes in 2018, when pro-Kremlin governors lost four key regions.

He was arrested on July 8, accused of organising assassinations as part of a crime ring in the early 2000s.

“We will never expel Furgal from the party. Let the voters of the Khabarovsk Territory see — he was the best governor in the history of the region,” said Zhirinovsky in a party statement on July 9.

“This [arrest] is a mockery of our country. This is our shame. We discredit ourselves in the eyes of the world community. Such an attitude towards people will blow up the Far East. … There, Chinese and Japanese intelligence work. And we, instead of uniting the country, are engaged in destabilisation,” Zhirinovsky added.

The court ruling came just days after Russians voted in a referendum to approve conditional reforms that will allow Putin to be re-elected for another two terms until 2036.

Furgal’s was one of several high-profile and controversial arrests have taken place in Russia since the Kremlin secured a massive 73% support in the referendum.

As reported by bne IntelliNews, famous defence reporter Ivan Safronov was arrested outside his apartment on June 7 and charged with treason. Following his arrest, on July 9 a number of opposition organisations, media and rights watch groups were searched by the security services. These included Open Russia, MBH Media and Pravozashita Otkrytki.