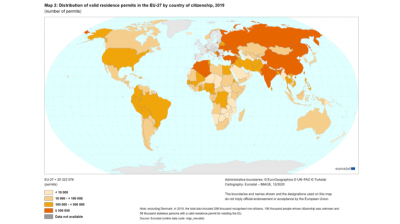 2.4mn people from the Western Balkans held valid residence permits for EU countries as of the end of 2019, almost 14% of the region’s population of 17.6mn, data released by the EU’s statistics office Eurostat showed on January 19.

This included 868,000 Albanians who held valid residence permits for EU countries, equal to just over 30% of the country’s 2.8mn population. This put Albania fourth among the source countries for legal immigrants in the EU.

At the end of 2019, there were a total of 20.3mn valid residence permits allowing non-EU citizens to reside in the union.

In absolute terms, Morocco was the largest source country for migrants with valid residence permits, with 2.0mn Moroccans in the bloc as of the end of 2019. Moroccans were followed by Turkey (1.9mn), Ukraine (1.3mn) and China including Hong Kong (1.0mn).

Hundreds of thousands of people from the Western Balkans have German residence permits but other popular destinations are Austria, Switzerland, Italy and Slovenia.

Many residents of the western former Soviet republics – Belarus, Moldova and Ukraine – are now resident in eastern EU members, primarily Poland. They include 132,759 Belarusians, 195,648 Moldovans and 1.2mn Ukrainians.

The data only covers until the end of 2019, but large numbers of migrants are reported to have returned to their home countries as the coronavirus (COVID-19) pandemic spread across Europe in March 2020.

The data also showed that several of the more prosperous new EU members in Central Europe have become increasingly popular destinations for non-EU residents, reflecting the high demand for labour in those countries whose economies boomed in the years before the pandemic struck.

For example, while Germany’s stock of residence permits remained roughly flat between 2011 and 2019, the number in Poland more than quadrupled from 144,876 to 649,352. Around two thirds of the third country nationals legally resident in Poland are Ukrainians.

There were similarly large increases in other countries, with the number of third country citizens with valid residence permits more than doubling in Bulgaria, Slovakia, Hungary and Finland during the same period.

Russia’s services PMI positive at 52.2, but down slightly from January

The seasonally adjusted IHS Markit Russia Services Business Activity Index registered 52.2 in February, down slightly from 52.7 in January. The latest reading signalled a modest rate of expansion that was slower than the long-run series average.

Better performance in Q4 left North Macedonia with a 4.5% GDP contraction for 2020.

Hungarian Q4 growth in GDP revised up to 1.4%

Services dragged the economy down, contributing a 3.2pp decline in Q4.

Kazakhstan manufacturing PMI posted 48.5 in February, as the rate of decline eased thanks to an increase in new orders.

The index’s expansion strengthens the outlook for recovery in Poland’s manufacturing sector in 2021.

Russia’s services PMI positive at 52.2, but down slightly from January
5 hours ago
North Macedonia’s GDP posts slim contraction of 0.7% y/y in 4Q20
7 hours ago
Hungarian Q4 growth in GDP revised up to 1.4%
8 hours ago
Kazakh manufacturing PMI shows continued deterioration in operating conditions in February
1 day ago
Polish PMI rises to the highest point in nearly three years in February
1 day ago