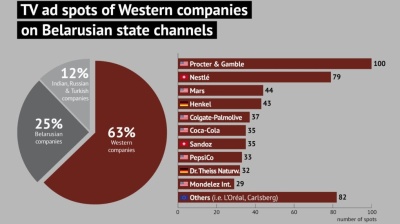 Two out of three adverts on Belarus' state TV were bought and paid for by leading western multinationals, who are continuing business as normal despite the brutal crackdown by the state on the population. / Libereco
By Ben Aris in Berlin August 5, 2021

Companies from Europe and the US place two out of three commercials broadcast on prime-time Belarusian state television, reports Libereco, an independent German-Swiss non-governmental organisation dedicated to the protection of human rights in Belarus and Ukraine.

Western companies and governments have shied away from cutting commercial ties to the regime of Belarus' President Alexander Lukashenko, despite several rounds of some of the harshest sanctions on record and almost universal condemnation.

Moldova is the only European country to recognise Lukashenko as President, but that has not stopped some of the most famous fast moving consumer good (FMCG) companies, raw materials traders and banks from doing business with Belarus.

The list of FMCG advertisers spending heavily on advertising their wares on Belarusian prime-time state TV reads like a who’s who of western multinationals, with Proctor & Gamble leading the list.

None of them have cut their spending, according to a report by Libereco, since the country was plunged into its worst political crisis ever following the disputed presidential elections last year on August 9.

The EU and US have both imposed harsh sanctions on Belarus in protest over the brutal crackdown and Stalinesque repression that followed the elections as Lukashenko attempts to cling to power.

However, the EU blinked when it came to imposing sanctions on potash, Belarus’ main export cash cow. The key class of potash that makes up 80% of the fertiliser exports was excluded from the sanctions list, as European agriculture remains heavily dependent on Belarusian potash for its business. Brussels has been criticised for not hitting Belarus harder, but justified the decision by saying that it wanted to keep something in reserve for future negotiations with Lukashenko.

Ukraine has also excluded itself from the sanctions regimes as its fragile economy is one of the most heavily dependent on Belarusian exports for things like fertiliser and diesel fuel. Ukraine’s abstention undermines the effectiveness of the sanctions, as it remains the most important export market for Belarusian products in Europe.

Austrian firms have also been very reluctant to punish Minsk for its crackdown on the Belarusian population that include arbitrary arrests and widespread reports of torture, rape and even extrajudicial murder of protesters.

The EU sanctions imposed in July almost failed after Vienna blocked the vote over fears of hurting its banks that operate in Minsk. Raiffeisen International owns a large share of Priorbank, the leading commercial bank in the country that has extensive business with the country’s biggest state-owned enterprises (SOEs). A deal was eventually thrashed out and the bank has promised to scale back its operations with the SOEs, but its details remain vague.

During the mass protests last summer the Austrian mobile phone company A1 that operates in the country collaborated with the state by slowing internet connects to hamper the protest actions, which are heavily dependent on social media for reporting abuses and co-ordinating the actions of crowds.

Vienna remains cautious of damaging its commercial ties with Belarus and is a reluctant participant in the anti-Lukashenko initiatives.

When Belarusian Olympic sprinter Kristina Timanovskaya escaped from her government minders in Tokyo that were trying forcibly to repatriate her following critical comment she made on social media, initially it was reported that she intended to seek asylum in Austria, but she was clearly rebuffed and accepted a humanitarian visa to Poland instead, where she arrived on August 4. Austria refused to grant her refuge because it feared damaging its commercial ties with Belarus, according to unverified comments posted on social media based on local reports.

Likewise, the Belarusian government have spent millions of dollars on US technology company Sandvine Inc. soft- and hardware that allows them to shut down parts of the internet and block opposition social media channels. The US company ignored its own ethical standard rules that would have precluded the sales to clients that use the product for political repression.

And Czech companies produce many of the munitions used by Belarus’ OMON riot police, particularly the flashbang stun grenades. The EU has a standing ban on selling arms and munitions to Belarus. It is unclear how the flashbangs arrived in Minsk but almost certainly came via a third party arms trader who is importing them to Belarus illegally.

Now advertising has come into focus as yet another example of western companies ignoring the plight of the Belarusian population for the sake of their bottom line.

In the early days of the protests the majority of the staff at the state-owned broadcasters walked out in sympathy with the protesters, but Lukashenko quickly flew in staff from Russia’s RT station who restarted broadcasting within a few days and began to churn out anti-protest propaganda.

The invective on state media has been steadily ratcheted up since then, with personal attacks on the likes of opposition leader Svetlana Tikhanovskaya becoming a regular feature of prime-time “reporting.” In one weekly show presenters profile prominent opposition figures they say should be hanged with graphics that include pictures of a noose. In Eastern Europe hanging is the traditional punishment for traitors. 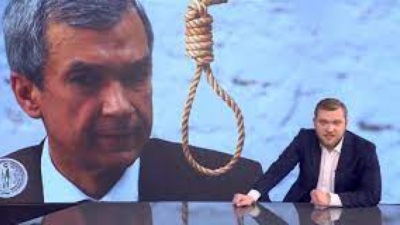 Belarus state TV presenter calls for the hanging of Co-ordinating Council member and former Culture minister Pavel Latushko, who is now a leading figure in the opposition in exile.

“It's probably no coincidence that head of Belarusian House in Ukraine Vitaliy Shyshov was murdered by hanging. Belarus state television makes weekly programmes about "traitors" that must be hanged,” opposition Twitter channel Belarus in Sweden posted.

“Western companies continue to advertise on Belarusian state television – despite the ongoing terror against the civilian population, tens of thousands of arrests and over 600 political prisoners. Even immediately before, after and during political broadcasts and propagandistic news formats, commercials by Procter & Gamble, Nestlé, Henkel, Coca-Cola or L’Oréal run, as a sample analysis by Libereco – Partnership for Human Rights shows,” the NGO said in its report.

For one week, from July 12 to 18, the German-Swiss human rights organisation observed and analysed the commercial breaks of the three state-owned television stations Belarus 1, ONT and CTV, each from 7 to 10 pm.

The result: Out of a total of 874 commercials, almost two-thirds (63%) were made by Western companies. The leaders are US companies with a total share of 32%. Companies from Belarus itself accout for a total of 25% of the spots. Companies from India, Russia and Turkey comprised the remaining 12% of the advertising spots. 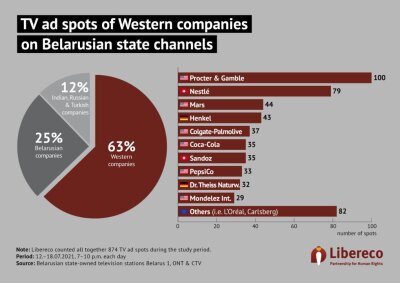 These advertisements appear despite more than 40,000 arrests in the past 12 months, at least 1,800 documented reports of torture and more than 600 political prisoners that are in detention, according to human rights organisations estimates.

“For a year now, the Lukashenko regime has been terrorising its own population; even the worst PR manager should have noticed that. The fact that global brands like Procter & Gamble, Mars, Henkel, Coca-Cola or PepsiCo continue to advertise on the dictator’s propaganda channels is a scandal. The companies obviously only care about their profits, they do not care about the catastrophic human rights situation in Belarus. The Western corporations have lost all sense of injustice, this is a moral declaration of bankruptcy,” Libereco’s chairman in Germany, Marco Fieber, said in the report.

The President of Libereco Switzerland, Lars Bünger, emphasises with regard to the food giant Nestlé, which despite criticism continues to advertise its products widely on Belarusian state television: “The company was comprehensively informed by us in a personal conversation at the beginning of July about the human rights situation in Belarus. After the recent shocking events, we now expect a public statement from Nestlé very soon on how they will end their advertising on Belarusian state media.”

Fieber and Bünger are appealing to politicians to ban advertising by international companies in Belarusian state media as a targeted sanction against the criminal Lukashenko regime, the report says.

“In addition to the sanctions already imposed by numerous countries, Libereco also calls on all democratic governments to take further punitive measures against the ruling regime in Belarus. Among other things, the organisation is pushing for Belarusian banks to be excluded from the international payments system SWIFT and for a ban on trading in Belarusian government bonds. Instead of the red-green Belarusian flag, which represents the Lukashenko regime, the white-red-white flag should be used internationally,” Libereco says.