Which foreign brands managed to get started in Uzbekistan during gruelling 2020? 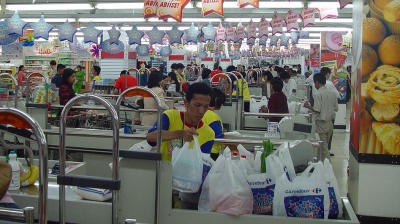 Carrefour plans on having its tills beeping in Uzbekistan by the end of the year.
By Alisher Kalandarov in Tashkent December 2, 2020

It’s an understatement to say that 2020 proved a gruelling test for the whole world. In business, enterprises often had to switch to experimental approaches or total restructuring of processes to keep going. In Uzbekistan, as elsewhere, the coronavirus (COVID-19) pandemic and lockdown necessities such as quarantining confused the plans of great numbers of domestic as well as foreign companies.

For example, Russia’s Sportmaster, which announced its expansion into the Uzbek market in 2019, and started recruiting in Tashkent in February, was forced to not only revise its plans, but attend to difficult situations on its main markets.

Despite challenging and often excruciating circumstances, but in some cases because of them, several foreign companies still arrived on the Uzbek market this year. Here are notes on some of the most significant ones.

Hilton Tashkent City has been hosting guests since the beginning of 2020. The 21-storey building has 258 rooms, including eight presidential suites. It is the first hotel of the American hotel chain in Uzbekistan and the third in Central Asia after Hilton Dushanbe and Hilton Astana.

The first vehicles of the Russian cargo and freight vehicle rental company appeared in Tashkent even before the pandemic, at the end of January. The company plans to cover the entire country by 2021.

In May, Uzbekistan became the first country to localise the Russian Selectel cloud platform. The company intends to invest up to $1mn in the development of its new market over three years. Selectel said it chose Uzbekistan as its first foreign market because it sees the economic potential of the country and the desire of the authorities to build a digital state and economy. Cloud technologies are an integral part of this process.

In June, Humans introduced the first version of its mobile app in Uzbekistan, combining finance, mobile operator services and goods and services showcasing.

In July, Tashkent hosted a presentation of the Volkswagen Caddy, which is offered in three versions. So far, Uzbekistan is selling models of the fourth generation, which was introduced in 2015. In 2021, production and sales of the fifth generation of the German car should start.

In July, the Russian company said it had adapted its Diadok system especially for Uzbek business: it presented a module that allows for exchanging electronic documents from the 1C accounting system.

The international company opened its first stores in Tashkent at the end of August. By the end of the year, there were already 13. Fix Price is a discounter, a store with a wide range of products at prices below the market average.

Sales of the Czech automaker Skoda’s Škoda Kodiaq started in Uzbekistan in the autumn.

Georgia’s TBC Bank opened two offices in Tashkent in October. They are currently operating in a test mode.

The Ukrainian food delivery service started operating in Uzbekistan in November. Given the country’s even lower penetration of online grocery delivery services than is the case in Ukraine, Zakaz saw huge potential for business development.

The French company is moving to open its first stores in Uzbekistan by the end of the year. Carrefour plans to work with more than 600 local suppliers, producers and farmers.

The largest Kazakh retailer plans to open at least six supermarkets in Uzbekistan in 2021, each of which will create up to 500 jobs.

The Russian lowcoster has won its permit from Rosaviation, but it still needs permission from Uzaviation to resume Russia-Uzbekistan flights.

In October, the St Petersburg-based social media and social networking company announced plans to open a representative office in Uzbekistan. Vkontakte is presently seeking a specialist to become its country ambassador. It says it wants to make its platform local in both meaning and products.

The European Bank for Reconstruction and Development (EBRD) has published a report on its activitiies in Uzbekistan in 2020. Central Asia’s most populated country during the exacting year saw funds ... more

Power outages have reached an all-time high in Uzbekistan. The energy ministry has blamed outdated equipment, while adding that it does not have enough resources to solve the problem. Thousands of ... more

The European Bank for Reconstruction and Development (EBRD) has allocated a senior local currency loan of up to $2.8mn in Uzbek sum-equivalent to Uzbek Healthline, a producer and trader of disposable ... more