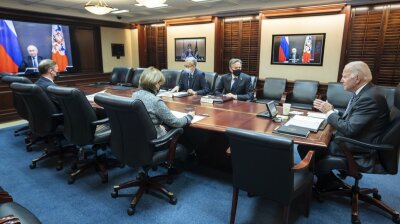 The US has announced a new tranche of military aid for Ukraine, worth around $450mn. The package includes four more high-mobility artillery rocket systems (HIMARS), on top of the four which America has already sent to Ukraine.

HIMARS are vehicles capable of firing guided rockets at targets up to 48 miles (77 km) away. They are a key demand from the Ukrainian army, which is currently outgunned by the Russian side in the crucial fight for the Donbas. Ukraine has already received four HIMARS from the US, in addition to similar multiple launch rocket systems (MLRS) from the UK and Germany.

In total, the new package brings the amount of military aid provided to Ukraine by the Biden administration to $6.8bn. The new package also includes artillery ammunition, tactical vehicles and patrol boats.

“The United States will continue to bolster Ukraine’s defences and support its sovereignty and its territorial integrity,” said National Security Council co-ordinator John Kirkby at a press briefing. “The bravery and determination of the Ukrainian armed forces, let alone their fellow citizens, continues to inspire the world, and we are committed to standing with them as they fight for their freedom.”

The announcement comes a week after senior Ukrainian officials travelled to Washington to ask for more military assistance. But the package unveiled by the Biden administration falls short of Ukrainian demands. Mykhailo Podolyak, an Ukrainian presidential adviser, wants the West to provide 300 rocket launchers, 500 tanks and 1,000 howitzers.

Moreover, the HIMARS sent are capable of launching some precision rockets as much as 200 miles (320 km). The US has opted not to provide these longer-range munitions, hoping to prevent an escalation by only sending rockets capable of hitting targets within Ukrainian territory. Top Ukrainian officials say that they need munitions with a greater reach in order to gain the upper hand on a battlefield which stretches hundreds of miles.

The first teams of Ukrainian soldiers have now been trained to operate the HIMARS, so the first four systems are ready to come into service.

In the next month, Ukrainian President Volodymyr Zelenskiy is set to address the upcoming G7 and Nato summits. He will look to secure more military and financial backing from Western leaders. During the G7 summit, US President Joe Biden will unveil steps to increase the economic and diplomatic pressure on Russia, while the Nato summit has been touted by officials as an opportunity to forge agreements to strengthen European security.

COMMENT: Emerging European tightening cycle coming to an end
Can we trust Russia’s economic statistics?
LONG READ: Is Russia’s economy headed for "economic oblivion" as a report from Yale says?