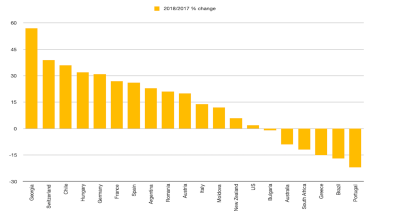 Global wine production rebounded in 2018 after last year’s historically low harvest, with some of the East European wine producers expecting massive hikes in output this year.

Some 282mn hectolitres (mhl) of wine is expected to be produced this year, one of the highest levels since 2000, says the International Organisation of Wine and Vine in newly released data. This follows an extremely poor year in 2017, though several of the main East European wine producers bucked this trend and saw production steadily rise though 2017 and 2018.

Italy remains the world’s top wine producer, having edged ahead of France a few years ago. Both countries recorded substantial increases in production this year, of 14% and 27% respectively.

Among the main East European wine producers, Romania (5.2 mhl) and Hungary (3.4 mhl) have both forecasted harvests above their five-year averages. Unlike France, Italy and other major West European producers, neither Romania nor Hungary recorded a slump in production in 2017, but forecasts for this year are still up by 21% and 32% respectively in the two East European countries. 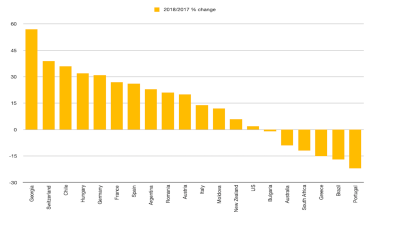 Further east, Georgia is expecting the biggest hike among all the main wine producers, with this year’s harvest expected to come in at 2.0 mhl — up 57% compared to 2017.

Another small former-Soviet nation, Moldova, is heading for a more modest increase of 12%, which would bring this year’s production to 2.0 mhl. Like their Georgian peers, Moldovan winemakers have been looking to new international markets. One of Moldova's top producers, Purcari Wineries, listed on the Bucharest Stock Exchange in neighbouring Romania earlier this year, and is making inroads into Central European markets.

Russia, which has also been seeking to build its reputation as a wine producer, hasn’t yet released a forecast for this year. The government plans to promote its viniculture and would like to follow countries like Georgia into international markets.

Meanwhile, Bulgaria was the only one of Eastern Europe’s main wine producing nations to slip backwards this year. Production is expected at 1.1 mhl this year, down 1% on 2017.

Elsewhere in the world, South American production levels, like Europe’s, are very high this year. By contrast, drought hit production in South Africa, while production also contracted in Australia. 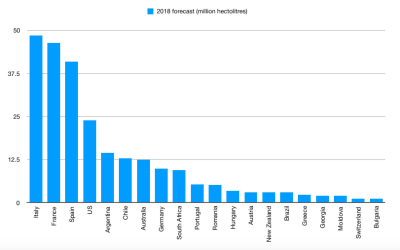