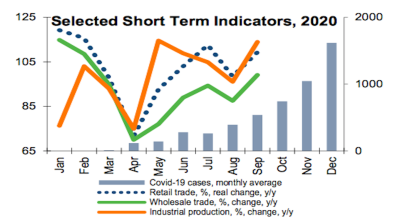 By Iulian Ernst in Bucharest January 5, 2021

The World Bank revised downward its forecast for Moldova’s economic decline in 2020 to 7.2%, from 5.2% estimated in October, in a review on the country’s economy released at the end of 2020,

The overall annual GDP decline in Moldova for the first nine months of the year was 9.2% y/y. The seasonally adjusted GDP further decreased by 1.1% in the third quarter of 2020 compared to Q2, in contrast to the recovery demonstrated by most global economies after the deep plunge during the first wave of the coronavirus pandemic in Q2.

The World Bank estimates a 4.5%-of-GDP public deficit in 2020, which would contribute to a 4 percentage point (pp) rise in the public debt-to-GDP ratio to 31.4% at the end of the year.

By the end of October, the budget revenues had fallen by 1.7% y/y, with income tax and VAT on imports being the main driving forces, the World Bank commented. Public spending increased as the authorities introduced pandemic mitigation measures. Priority has been given to social spending, while investments contracted by over 4%.

Uncertainties about the evolution of the pandemic will keep the economy below its potential level, according to the World Bank report.

In case of more favourable conditions following the development of vaccines, the bank predicts economic growth of 3.8% in 2021. Consumer and investor confidence will recover against the background of stabilising remittances, rising public wages and the accommodative monetary position. “It is also expected that most sectors will recover, although we estimate that the level of 2019 will only be reached in 2022,” the report reads.

The agricultural sector is expected to recover strongly after last year's poor harvest. Although the World Bank estimates that the current account deficit narrowed in 2020, it sees it as widening gradually as the economy begins to accelerate.

Similarly, average inflation is expected to remain below the 5% target level over the years 2020-2021, but increase as the recovery intensifies.

While businesses are struggling and households are suffering from weak job and wage growth, the World Bank expects the fiscal position to deteriorate due to weaker budget collections. As a result, public debt will increase rapidly, but will remain relatively small by international standards.

There are considerable risks associated with this round of economic forecasts, the World Bank notes.

The fragile recovery outlook is based not only on favourable conditions related to the successful launch of the vaccine, but also on the authorities' ability to move forward with long-term structural policy measures in parallel with the implementation of economic recovery measures.

Given the growing financing needs, driven by a growing burden on wages and social transfers, it is essential to ensure fiscal efficiency and access to external financing.

The unfinished agenda of justice and governance reform, together with a large state footprint in the economy, are important structural impediments.

Reforms in the non-banking financial sector, competition and price regulations, the fight against corruption and the rule of law, and the strengthening of productivity are essential for the resilience of the private sector and sustainable economic recovery.

Polish industrial production jumps 18.9% y/y off low base and returning demand
9 hours ago
Czechia and Slovakia recorded the highest excess mortality rates in the EU in February
1 day ago
Polish PPI expansion picks up to 3.9% y/y in March
1 day ago
Moldova’s currency falls amid weak exports, no grants
2 days ago
Romania’s Chimcomplex shares soar by 29% on WSE listing news
2 days ago