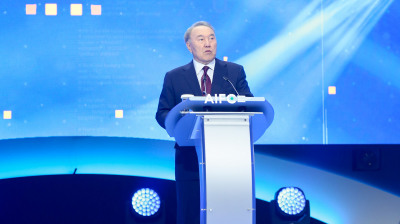 The remaining 75% in the company is to be retained by its present sole shareholder, Kazakh sovereign wealth fund Samruk-Kazyna.

The IPO is set to take place on Kazakhstan’s recently launched Astana International Exchange (AIX), which hopes initial public offerings will help draw liquidity to the new bourse. Kazakhstan has lately been promoting its privatisation programme, which includes plans to list seven large state-owned companies in all on the LSE and AIX.

Kazatomprom’s announcement demonstrates Kazakhstan’s commitment to actually making the IPOs happen after numerous delays, which may have weakened interest among many potential investors. Nevertheless, the global market for IPOs has been hit by troubles on world financial markets, leading many companies to postpone listing plans—Kazatomprom’s plans also remain subject to market trends.

The Kazakh uranium miner’s IPO registration document said that it plans to publish the prospectus for the offering on November 13, Reuters reported.

Structural shift in supply side
Kazatomprom’s output accounts for 20% of the world’s uranium production.

“The company believes that the supply side of the uranium market is undergoing a structural shift, following a prolonged period of depressed spot prices and oversupply, underpinned by the prevalence of legacy long-term contracts, the majority of which were concluded in the period between years 2005 and 2012,” Kazatomprom said on October 16. “As a significant portion of such [legacy long-term] contracts are set to expire in the early 2020s, many utilities are likely to return to the market in the near-to medium-term to begin covering their future fuel needs.”

The country’s latest plans estimate the timetable for floating the state-owned enterprises within 2018-2020, with the first IPO scheduled for the fourth quarter of this year. Other planned listings, aside from Kazatomprom, include those of national carrier Air Astana and the soon-to-be near-monopolist of the local telecoms market Kazakhtelecom.

The attractiveness of Kazakh companies will likely be indirectly impacted by US sanctions on Russia leading to an overall negative perception effect across the former Soviet republics very markedly economically tied to Moscow’s fortunes.

Moreover, last month Shell backed out of a decision to buy a stake in Kazakh state-run oil and gas company KazMunayGas (KMG)—that may not reflect well on Kazakhstan’s plans to float the company. Kazakhstan has previously expressed an intention to sell small stakes in its state-owned enterprises in order to capture the attention of foreign investors ahead of the IPOs.

Shell’s decision in relation to KMG came following a due diligence process which included discussions on corruption risks at the company involving the informal control over the company exercised by Kazakh President Nursultan Nazarbayev’s son-in-law, Timur Kulibayev.