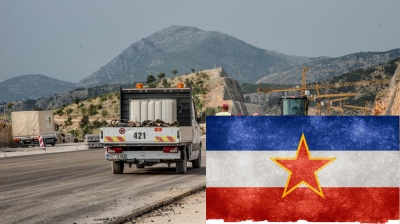 The deal struck by the Montenegrin government for the Bar-Boljare highway remains largely opaque.
By Clare Nuttall in Glasgow June 30, 2021

Small states and transition economies are particularly vulnerable to ‘corrosive capital', a concept pioneered by think tank the Center for International Private Enterprise (CIPE) and defined as international financing to countries that lacks transparency, accountability and market orientation. The former Yugoslav republics are both small and in transition and as such have been the target of what analysts from CIPE and its partners say are un-transparent investments with a geopolitical agenda.

Corrosive capital “often flows from authoritarian regimes into new and transitioning democracies, in many cases widening corruption and undermining efforts to support more inclusive economies,” according to CIPE. Its opposite is “constructive capital’, describing transparent, accountable and market-oriented investments.

CIPE describes this as an “alarming trend occurring worldwide” and its research looks at several parts of the world, finding examples of corrosive capital in areas as far afield as Southeast Asia and Latin America. However, Eric Hontz, who leads CIPE's work on corrosive capital, considers the transition experience may have contributed to the situation in Southeast Europe and other post-socialist countries.

“I think it’s the post-socialist rather than the socialist legacy, where authoritarian capital investors are looking to invest in an economy that already has a fairly oligarchical structure. When you have a very high market concentration in the economy and not really a competitive market environment, it’s easier to capture those elites and exert your influence,” Hontz told bne IntelliNews.

Another factor relevant to the Western Balkans is that Hontz considers small states may be more vulnerable. “This is particularly true in very small states such as Montenegro or Kyrgyzstan. In relatively small states without a lot of state capacity, it’s easier to capture a local actor and really have an outsized influence on the direction of policy in a way that’s beneficial to the investor.”

Hontz likens this to the actions of colonial powers in Africa. “I hope this isn’t happening again because it had a terrible legacy, but there are undertones. It’s the same kind of strategy of capturing an elite, and exerting influence or imposing rules onto a third country.

“It’s really disheartening because some of these countries have fought so hard for their sovereignty only to give it up to the highest bidder a few decades later.”

One example that has grabbed international attention recently is in Montenegro, where the government recently approached the EU to ask for help with its debt to China, taken out to build the 170-km Bar-Boljare highway. Podgorica had struggled for a long time to find partners for the project to replace an unsafe round through mountainous territory until China stepped in in 2014.

CIPE cites a report from the Center for Democratic Transition (CDT) in Podgorica that “suggests that local elites have benefited handsomely from the deal”. The think tank notes that the “details of the final deal with China remain completely opaque apart from what dribs and drabs the government has disclosed voluntarily”. Moreover, already, there have been delays, cost-overruns and complaints about environmental damage.

While less reported, there is a similar story in North Macedonia surrounding its part of Corridor VIII, connecting the Adriatic to the Black Sea. Again, China stepped in after Skopje failed to find partners. The then government struck an agreement wth the Chinese government in 2012, and the following year passed a law on the Miladinovci-Shtip and Kichevo-Ohrid road sections, in what local think tank Institute for Democracy Societas Civilis – Skopje (IDSCS) described as a “questionable legal manoeuvre … designed to do an end-run around existing laws on public procurement”.

When then opposition leader (now prime minister) Zoran Zaev published wiretapped conversations implicating government officials including then prime minister Nikola Gruevski in various corruption scandals, they included indications officials had been tying to skim money off from the deal. But even after Gruevski’s government was toppled, the new government led by Zaev went ahead with the project. “Given sunk costs, he may not have had any political alternative,” commented CIPE. Moreover, it added, “The ongoing relationship with a behemoth like China is ultimately too important for a small Balkan country to challenge.”

In Serbia, questions surround the sale of the massive mining and smelting complex RTB Bor to the Chinese company Zijin, which was followed just days later by the same company’s purchase of the nearby deposits of copper and gold at Cukaru Peri.

A report from the Center for Contemporary Policy (CCP) in Belgrade cited by CIPE describes the tender as both brief and opaque, though stresses that it found no evidence that the Serbian authorities benefitted from the deals. “Still, it is hard to believe that they were unaware that the Chinese were set to acquire control over a very complimentary asset for RTB Bor. At minimum, this fact raises further questions about the government’s seeming eagerness to give the deal to the Chinese over rival bidders,” wrote CIPE.

“The report also underscores how the terms of the undisclosed agreement almost certainly don’t include adequate regulatory oversight. Problems, including water and air pollution, and even damage to homes in neighbouring villages from irresponsible use of dynamite around the mines, continue to crop up, but Serbian authorities have either dragged their feet to address them or have actively ignored them.” This sparked protests initially around Bor but later spreading to Belgrade.

As the largest economy in the region, Serbia has also attracted investors from Russia, the Middle East and other areas. Russian investors have gradually been taking over assets in the energy sector, most notably through the 2008 energy agreement that included Gazprom’s takeover of Serbia’s largest state-owned enterprise, the oil and gas company NIS.

“In the case of Russia in particular in the Western Balkans they are less concerned with [internal rate of return] IRR than exerting geopolitical influence,” says Hontz, citing the example of Gazprom’s purchase of the Serbian pipeline operator “on very obscure deal terms and promises of more investment in future”.

He stresses, however, that CIPE doesn’t "want to say China bad, Russia bad, the West good”. Rather he likens the different approaches of investors from western and authoritarian states as “like baseball versus cricket  … but at the end of the day they are just playing by their own particular rules.”

Instead, he says, “I would like to say focus on the local economy, what is good for them, what kind of economy do they want. … We think corrosive capital is not a great path to go down.”

Crisis as an opportunity for corrosive capital

A concern now is that the pressure the coronacrisis is putting on economies in the region could make local elites more receptive to corrosive capital.

“One of the things we noticed was in the aftermath of the 2008 crisis was developing economies and emerging markets really sought FDI anywhere, waived all the rules… that’s very dangerous and set up many of the issues we see today,” said Hontz.

“Finance and investment take time to show up in the real economy and touch people, institutions are slow to change and adapt. The 2008 crisis is what we’re reaping down the road. From the investments made in 2010, we are seeing in 2020 what damage they had on the institutional structure of the economy.”

Looking ahead to the future impact of the coronacrisis, Hontz said: “what we’re fearful of is that the COVID crisis will have similar effects.” This could be worse in developing countries that lag behind the better-vaccinated West in terms of reopening their economies. He fears that politicians will promise to waive rules for anyone willing to invest and expresses concern that “there might be opportunistic players that are seeking not exactly market oriented investments that would take advantage of that."