Zelenskiy calls on UN to expel Russia or dissolve itself 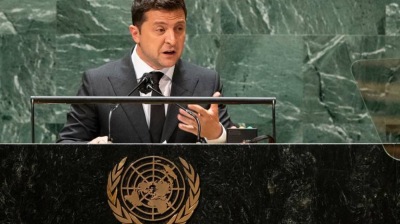 In an address via video link, the Ukrainian president called on the UN Security Council to expel Russia or dissolve itself. / Image: bne IntelliNews.
By Theo Normanton April 5, 2022

In an impassioned speech to the UN Security Council (UNSC), Ukrainian President Volodymyr Zelenskiy challenged the organisation to expel Russia or “dissolve yourself altogether”. He showed images of dead civilians, who he said were killed by Russian soldiers before their retreat from the North of Ukraine.

As one of the five permanent members of the UN Security Council, Russia has a veto on important resolutions. It used this veto to block a resolution condemning its aggression in Ukraine. More significantly, Russia’s veto also makes it impossible to expel the country from the Security Council. In order for Russia to be kicked off the UNSC, a recommendation to expel it would have to be passed by all five members – including Russia.

President Zelenskiy said that the images of apparent war crimes coming out of the town of Bucha – which show dead civilians and mass graves – are comparable to the activities of “terrorists” such as Islamic State.

"If there is no alternative and no option, then the next option would be dissolve yourself altogether," Zelensky suggested.

The video showed by Zelenskiy included images of dead civilians, including children.

Vasily Nebenzya, Russia’s ambassador to the UN, denied claims of war crimes, saying that there were “flagrant inconsistencies” in reports seen in Ukrainian and western media.

He cast aspersions on the video shown by Zelenskiy by claiming that the corpses found by reporters in Bucha were not there when Russian forces left the northern city. This argument has been debunked by satellite imagery from mid-March, which shows that some of the corpses discovered after Russia’s retreat had been there since the Russian army controlled the area.

Zelenskiy went on to say that further war crimes would be discovered in other areas occupied by Russian forces, and that the UN must “act now”. “Accountability must be inevitable,” he said.

No country has been expelled from the UN since it was founded in 1945. It is much more likely that Russia would be removed from the UN Human Rights Council, or that Russian officials would be suspended from speaking and voting in the UN General Assembly. Both of these results could be achieved by a vote with a two-thirds majority.

UN Secretary General Antonio Guterres also gave a speech to the Security Council, warning that the global fall-out from the conflict could create a humanitarian crisis, with rising food, energy and fertiliser prices affecting up to 1.2bn people.