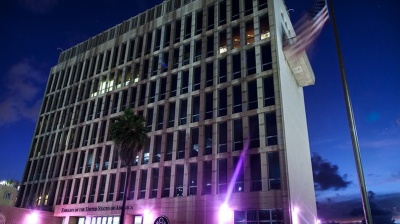 The US embassy in Cuba. Havana Syndrome first sprung to attention following cases among American personnel posted to the Cuban capital.
By bne IntelIiNews July 21, 2021

New reporting on the mysterious ‘Havana Syndrome’ afflicting US diplomats, intelligence officials and other personnel has pointed to cases in Central Asia.

On July 20, NBC News reported officials as saying that in the past year, more than one American in Kyrgyzstan has experienced symptoms, including a baby. The following day, ABC News put out a report referring to a case or cases in Uzbekistan, reporting that so far the US government has in public or in classified documents acknowledged cases in Cuba, Austria, China, Uzbekistan, Russia and the US.

The neurological symptoms associated with the Havana Syndrome—which the US is concerned may constitute a series of attacks by a foreign actor—were first experienced by US diplomats around five years ago in Cuba. It is an article by The New Yorker magazine on a cluster of around two dozen cases at the American embassy in Vienna that has thrown the spotlight back on to the mystery.

ABC said the US intelligence community has launched a new panel of experts to investigate the "anomalous health incidents", as they are referred to by US officials. The panel brings together senior officers from the CIA and the Office of the Director of National Intelligence and outside scientific and medical experts.

The new panel will follow up on the findings of a report by the US National Academies of Sciences, Engineering and Medicine issued last December. It concluded that "directed, pulsed radio frequency energy appears to be the most plausible mechanism in explaining these cases, especially in individuals with the distinct early symptoms" and said that some of the observed brain injuries were consistent with the effects of directed microwave energy, which Russia has long studied.

NBC News reported in 2018 that US intelligence officials considered Russia a leading suspect in what some of them determined were deliberate attacks on diplomats and CIA officers overseas. But there was not—and there is not now—conclusive intelligence pointing in that direction, multiple officials who have been briefed about the matter told the media outlet for its latest report.

Dozens of US officials have been diagnosed with ‘Havana’ injuries, including traumatic brain injuries, after reporting strange experiences like high-pitched sounds or feelings of pressure or vibration, or debilitating symptoms including headaches, nausea, cognitive deficits and trouble with seeing, hearing, or balancing.

US officials have also privately briefed various media that they suspect the actor behind Havana Syndrome may be using a microwave energy device either to secretly gather digital data or to deliberately injure American personnel in a campaign of harassment.

Former CIA officer Marc Polymeropoulos, who has said he believes he was hit during a trip to Moscow in 2017, said what has happened is "a mass casualty event."

Perspectives | Why Uzbekistan does not fear a ‘Kazakh Winter’

Uzbekistan: How a power outage sent a country into meltdown
China promises more investment at Central Asia summit
Perspectives | Why Uzbekistan does not fear a ‘Kazakh Winter’