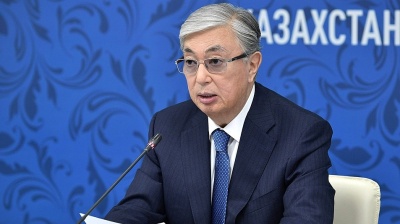 Tokayev is attempting to make it very clear the Nazarbayev era is over. / Kremlin.ru CC-BY-SA 3.0.
By bne IntelIiNews January 26, 2022

Kazakhstan’s President Kassym-Jomart Tokayev on January 25 stepped up his purge of senior officials in the wake of the deadly unrest that shook the country after the turn of the year, firing another relative of his predecessor, Nursultan Nazarbayev, in the process.

The day was full of announcements indicating Tokayev is installing his own people as he continues his populist bid to make a clean break with the three-decade-long Nazarbayev era.

The presidential press service announced that the head of the Central Election Commission, Berik Imashev, had been replaced by Nurlan Abdirov. Imashev had run the body since September 2016. His daughter, Aida Imasheva, is married to Nazarbayev's grandson, Nurali Aliyev.

At Kazakhstan's $69bn sovereign wealth fund, Samruk-Kazyna, the resignations of seven top managers were confirmed following a presidential decree ordering staff cuts. Bloomberg reported that Samruk-Kazyna, after completing a root-and-branch overhaul, would use lie-detector tests to root out corruption.

Also on January 25, the Kazakhstan Development Bank (QDB) announced that its chief, Abai Sarkulov, had left his post. The day before, Tokayev criticised the lender as a bank that had been transformed "into a private bank for a narrow group of individuals representing financial, industrial, and construction groups".

Tokayev appears to be well aware that if he wants to persuade a sceptical population that he is putting an end to political stagnation and corruption and delivering a fairer distribution of the oil-rich country’s wealth, he has to very publicly target swathes of officials associated with the Nazarbayev era as part of a clean-up process. Tokayev has acknowledged the countrywide protests were sparked by economic discontent, though, without evidence, has stuck to the line that the unrest was then exploited by “terrorists” and foreign “plotters”.

Detailing its move to use lie-detector tests in a crackdown on graft, Samruk-Kazyna reportedly said it would require polygraph assessments for executives and managing directors appointed to run the companies it controls.

Deputy chief executive officers and managing directors will now be subject to “psychological profiling” to test their “resistance to corruption risks,” the fund said.

Samruk-Kazyna and its CEO Almasadam Satkaliyev have received an ultimatum from the president to reform or fade “into nothingness”.

On his Facebook page, Satkaliyev shared key reforms that were being discussed with the government, including “the possibility of the direct participation of Kazakh citizens in owning the assets of the fund, as an element of a fair distribution of national wealth,” The Astana Times reported.

The new reforms are set to impact multiple industries, including oil and gas, coal, electricity, railway transport and telecommunications.