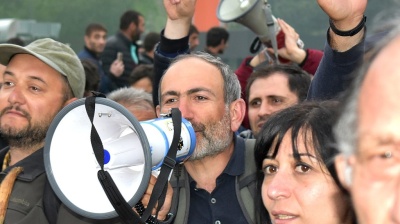 Pashinian has agreed to an early election but he has resisted calls to step down ahead of it.
By bne IntelIiNews March 19, 2021

Armenia’s embattled Prime Minister Nikol Pashinian said on March 18 that the country will hold a snap election on June 20 in an effort to end the political crisis that has beset the Armenians since they lost a war with Azerbaijan late last year over the Nagorno-Karabakh enclave and surrounding districts.

An agreement for the poll was struck on June 20 after discussions with Armenia’s president and the leaders of its two largest opposition parties, he said.

“The best way out of the current internal political situation is the early parliamentary elections,” Pashinian wrote on Facebook after meeting Gagik Tsarukyan, one of the opposition leaders.

Tsarukyan concurred that Armenia needed “to form a new government and cabinet to get the country out of the dire situation it finds itself in”.

Pashinian has remained in office despite pressure from Armenia’s army, ceremonial president, three parliamentary opposition parties and church leaders to step down over the defeat in Nagorno-Karabakh. At one point he accused the army of mounting a coup attempt after top officers issued an open letter calling on him to step down. At that point his supporters stepped up their Yerevan street rallies to counter those being held by their opponents.

The My Step bloc of Pashinian, who has resisted calls to step down ahead of an early election, controls 83 seats in the 132-member parliament.

Most Armenians want an early general election—but at the same time Pashinian’s My Step remains the only political force in Armenia that attracts significant public support, a poll showed this week.