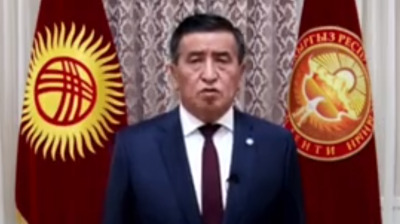 President Sooronbay Jeenbekov appeals on state television on October 9 to "everyone to keep the peace, not break the law and not succumb to provocations".
By bne IntelIiNews October 9, 2020

Former president of Kyrgyzstan, Almazbek Atambayev, reportedly survived an assassination attempt unhurt in Bishkek on October 9, a day that also saw the president, Sooronbay Jeenbekov, who remained in hiding, declare a state of emergency from midnight in the capital city. Jeenbekov also ordered the army on to the streets to quell the unrest seen in the ongoing uprising that has beset the country in the past week.

Atambayev’s car was shot at, Russia’s RIA news agency cited an aide as saying. Apparent video footage of the incident and Atambayev pointing to bullet marks on his car afterwards was released on social media but it is unverified.

Kyrgyzstan: Atambayev having a good old chuckle as he shows off where his car was struck by a gunman pic.twitter.com/B3jiQUu2ob

Kyrgyzstan: Atambayev having a good old chuckle as he shows off where his car was struck by a gunman pic.twitter.com/B3jiQUu2ob

Eurasianet reported that the assassination attempt was the work of a supporter of Sadyr Japarov, a politician and convicted kidnapper it said was making an “attempt to engineer a seizure of power in Kyrgyzstan by unleashing destructive hordes upon the capital”. The publication said that the violent effort had “taken an ominous turn”, adding: “Sadyr Japarov’s supporters have assaulted journalists. His mobs broke up a peaceful rally by pelting participants with rocks and bottles. And one of his men attempted to assassinate a political opponent.”

Also during the mob attack, another rival to Japarov, Tilek Toktogaziyev, was reportedly critically injured after he was struck on the head with a rock.

Japarov—once an adviser to former president Kurmanbek Bakiyev who was forced to flee the country in the Second Kyrgyz Revolution of 2010—was amid this week's tumult freed from prison where he was serving an 11-and-a-half year sentence for kidnapping a regional governor in 2013. Within hours of his release he persuaded several parties of the outgoing parliament to nominate him as Kyrgyzstan’s acting prime minister.

However, a rival faction nominated Toktogaziyev, a 29-year-old businessman who ran in the election on the list of the Ata-Meken party. Two days later they amended the plan, with Toktogaziyev agreeing to be the nominee for deputy PM, and Omurbek Babanov, a one-time prime minister and the anti-corruption, anti-organised crime multimillionaire founder of the Respublika party who failed with a presidential bid in 2017, to stand for the position of PM. Toktogaziyev subsequently told journalists that a leading goal of their candidacies was to quash the peril posed by Japarov.

There have been days of violence sparked by the furious reaction of opposition parties to what they said were the fixed results of Kyrgyzstan’s October 4 parliamentary election, results that were overturned by the Central Election Commission after the outbreak of unrest that saw the White House presidential offices and parliament building, national security service HQ and public broadcaster’s main building taken over by protesters and the freeing of politicians from jail, including Atambayev, a bitter adversary of his former ally and successor Jeenbekov. The government was subsequently dissolved. Substantially more than 1,000 people have been injured in the unrest so far, with one person known to have died.

Also on October 9, lawmakers in Kyrgyzstan—under pressure from the Kremlin to resolve the chaos in the country—told RFE/RL that members of parliament would gather on October 10 at the Kyrgyz presidential residence outside of Bishkek to discuss Jeenbekov’s state of emergency decision and vote on a new prime minister. Jeenbekov has said he will resign once a new cabinet has been formed and approved.

Local reports said armoured vehicles and military trucks with troops were seen on roads outside of Bishkek after the emergency regime came into effect and very late in the day special forces troops were spotted in central Bishkek. 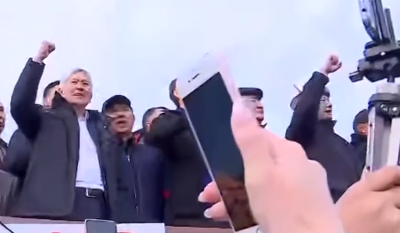 Atambayev (left) is seen at the rally in Ala-Too Square not long before the attack on the crowd and attempt on his life (Screengrab from RFE/RL video footage).

Hours before the clashes centred around Bishkek’s Ala-Too Square in which the attempt was reportedly made on his life, Atambayev had called upon Jeenbekov to resign “peacefully.”

The state of emergency is to run until 8am on October 21 with Deputy Interior Minister Almazbek Orozaliyev to act as the commandant responsible for law and order in Bishkek, according to a decree signed by Jeenbekov. It also states that vehicles and the movement of people in the city will be restricted and a curfew will be introduced, with mass gatherings, demonstrations and public events banned.

Kyrgyzstan: Military vehicles headed toward Bishkek. These APCs reportedly seen around Tokmok, 60 kilometres to the east, at 10 pm pic.twitter.com/KAd1oBZ3FR

Kyrgyzstan: Military vehicles headed toward Bishkek. These APCs reportedly seen around Tokmok, 60 kilometres to the east, at 10 pm pic.twitter.com/KAd1oBZ3FR

Jeenbekov on October 9 also met with the newly appointed chief of staff of the armed forces, Taalaibek Omuraliyev, whom he asked to quell the unrest and maintain peace. It wasn't immediately clear whether all the police and military would obey the state of emergency order.

In their report on the violent events of October 9, RFE/RL correspondents also said that Japarov’s supporters hurled stones and other debris.

Explaining events further, Eurasianet said that while there were gatherings centred around Toktogaziyev and Babanov, and Japarov, there was a third rally “which was the wildcard”. It added: “This was summoned at a building called the Forum, which has long been known as the base of operations for Almazbek Atambayev… Babanov joined the Forum rally after his own was completed.

“The spectacle of Atambayev and Babanov together is one of the more remarkable developments of this season of Kyrgyz politics. It was Atambayev who, before completing his single permitted six-year term, handpicked Jeenbekov to be his successor. Atambayev then placed his thumb heavily of the scales of the 2017 election to ensure Babanov was knocked out in the first round of voting.”

The publication continued: “In the interests of thwarting Japarov, all that history [between Atambayev and Babanov] was set to one side. And so, they, together with hundreds of followers waving the bright red flag of Kyrgyzstan, embarked on a five-kilometer march to Ala-Too. Rally agitators on the back of a truck leading the way roused the walkers into chants of ‘Jeenbekov leave!’ and ‘Sooronbay, bye-bye!’”

Giving an eyewitness account of the attack mounted by Japarov’s supporters, it said: “The assault on the Ala-Too meeting was sudden and ferocious. Stones and bottles were thrown with abandon. Toktogaziyev was struck on the head with a rock and had to be hospitalised for critical care. The bodyguard of another politician was severely beaten.

“Several of the politicians had to barge through a gauntlet of fists and stick-wielding attackers before managing to climb into waiting cars. One man rushed to intercept a Mercedes S-Class car carrying Atambayev and fired several rounds at it from a pistol. Although the bullets damaged the body of the vehicle, none hit any of the passengers.”

On November 25 one of Romania’s most controversial and unnecessarily prolonged political crises, with profound economic and social implications, came to an end.