BALKAN BLOG: Balkan peace processes a victim of divisions between Europe and US 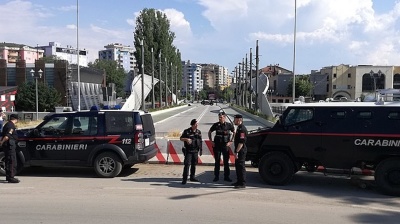 Carabinieri KFOR-MSU patrols in the ethnically divided town of Mitrovica, Kosovo. American and European forces are both involved in keeping the peace in Kosovo.
By Clare Nuttall in Glasgow September 26, 2019

The discord between erstwhile allies the US and the European Union in the years since the election of Donald Trump as US president is holding back efforts to keep the peace and normalise relations within the former Yugoslavia.

Since Trump’s election in 2016, the US has no longer been seen as the leader of the “free world” and upholder of liberal and democratic values, and Brussels and Washington have diverged on foreign policy issues — a notable example being the treatment of Iran.

The impact of this divergence on smaller, lower-profile conflicts around the world as well was highlighted by US Democratic senator Chris Murphy, reporting back on a visit to Southeast Europe that took in adversaries Serbia and Kosovo as well as Ukraine (a visit that has embroiled him in the unfolding “Ukraine-gate” scandal).

Writing in a blog post after his trip alongside Republican senator Ron Johnson, Murphy, a member of the Senate Committee on Foreign Relations, said of his meeting with top Kosovan politicians: “Right away, Kosovo’s leaders complained to us about how the breach between the US and Europe was affecting their security. … The leaders tell us that these days, the United States and Europe come to Pristina and give them different advice on how to break the impasse — they don’t know who to listen to. More fallout from the disastrous Trump foreign policy.”

Murphy argued that countries like Serbia and Kosovo — US was one of the champions of Kosovan independence — had been all but ignored since the start of Trump’s presidency.  “Our meeting with [Serbian President Aleksandar] Vucic is important, because the Trump Administration gives little attention to the still simmering conflicts in the Balkans. Our visits to places like Belgrade and Pristina are the highest-level American delegations these countries are likely to receive during Trump’s tenure,” Murphy claimed.

To be fair, however, in August the US State Department appointed deputy assistant secretary Matthew Palmer as the special representative for the Western Balkans, tasked with integrating the divided region into western institutions. One of Palmer’s first actions was to urge Kosovo and Serbia to restart talks after the snap general election in Kosovo on October 6.

Elections and other domestic political crises are invariably a flashpoint for tensions that periodically spike between Serbia and Kosovo, a former province of Serbia that unilaterally declared independence in 2008, so a ramping up of rhetoric can be expected in the coming weeks.

It is usually the US and the EU, acting in cooperation, that have brought the two sides back to the negotiating table. EU membership is the primary political goal of all countries in the region, but good relations with Washington are also seen as very important. This has led to progress such as the landmark Brussels Agreement of 2013 between Serbia and Kosovo, and the Prespa Agreement under which the country formally known as Macedonia was renamed North Macedonia, ending a decades-long conflict with Greece that had blocked its progress towards EU and Nato membership.

Without coordinated international pressure, there is less of an incentive to work towards mending relations. In the last year, the always strained situation between Serbia and Kosovo has worsened. Pristina slapped 100% tariffs on imports from both Serbia and Bosnia & Herzegovina (which like Serbia does not recognise Kosovo as an independent state), causing exports from both states to plummet, and Belgrade to raise concerns about the welfare of the Serb minority in northern Kosovo. “We both believe that [Vucic] is willing to strike a deal with Kosovo to recognise their independence, but right now, he is mad as a hornet over the 100% tariff,” said Murphy following his visit to Belgrade.

Meanwhile Serbia, aided by Russia, has been stepping up its campaign to persuade states that have recognised Kosovo as an independent state to reverse this recognition, and also keep Kosovo out of international organisations like the UN and Interpol. As a result, a deal between the two sides — the only way either can progress towards EU membership — looks as far off as ever.

Beyond Serbia and Kosovo, the situation is also deteriorating in Bosnia, where no state-level government has been formed in almost a year since the October 2018 elections. The always provocative Serb member of Bosnia’s tripartite presidency Milorad Dodik said on September 24 that he hasn’t given up plans to set up a reservist police force to arm Republika Srpska, Bosnia’s Serb entity that Dodik would like to see secede from the rest of Bosnia.

The failure to resolve these situations isn’t only due to the lack of attention from the US. While there have been efforts to revive the enlargement process in recent years, initiated by the European Commission, European politicians have been distracted by the questions thrown up by the migrant crisis and Brexit about the future of their union. Where the Western Balkans are concerned, EU leaders diverge over whether Albania has sufficiently addressed issues such as judicial reform and the drugs trade to be allowed to start accession talks, and five EU member states do not recognise Kosovan independence — with Czech President Milos Zeman recently controversially stating earlier this month that he would like Prague to withdraw its recognition of Europe’s youngest country.

The growing rift between the EU and US since Trump came to power is not only having an impact in the Western Balkans. As Yigal Chazan of business intelligence consultancy Alaco wrote in a recent comment for bne IntelliNews, there is also a widening divide over sanctions policy towards both Russia and Iran. “The emerging rift could undermine coordination of two of the world’s biggest sanctions programmes, a process fostered under the Obama presidency. Such cooperation is regarded as critical to pressuring rogue regimes, from Caracas to Pyongyang, into changing direction,” wrote Chazan.

And geopolitics abhors a vacuum. For the Western Balkans, this creates a void for other world powers — specifically Russia and China — to step in and increase their influence at a time when the Euro-Atlantic alliance has weakened dramatically.