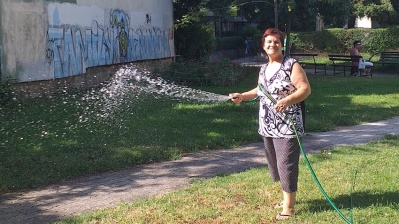 Residents of North Macedonia's capital Skopje say the city, located in a valley among mountains, feels like a furnace.
By bne IntelliNews August 1, 2021

Much of Southeast Europe is suffering under a heatwave that has sent soaring temperatures to 40°C or higher in parts of the region, causing wildfires, threatening human health and disrupting some industries.

This heatwave has been caused by plumes of hot air moving upwards from Africa, but such extreme weather events are forecast to become more frequent in the region. One study projects that cities in Southeast Europe will experience some of the fastest temperatures increases worldwide over the coming decades, and temperatures in the region will resemble those in the US Deep South by 2050.

In North Macedonia’s capital Skopje, for the last few days staying outside even as late as 5 pm is like being in a furnace, as temperatures exceed 40°C. You just inhale hot air, without even a small breeze to bring some relief, writes bne IntelliNews’ correspondent in Skopje.

After an orange weather warning was issued for the country from July 29 until August 1, the government announced a series of measures to reduce risks of high temperatures for people who are working outdoors, but also for other vulnerable categories. Construction companies and other firms that work outdoors were urged to stop their activities from 11 am until 5 pm during the four-day period.

People aged over 60 and pregnant women are exempted from work. Kindergartens are advised not take children outdoors between 11 am and 5 pm. The authorities also urged people to stay at home in air-conditioned premises and to avoid being outdoors.

The number of phone calls to the Emergency Medical Service in Skopje has increased in recent days as people are seeking help for feeling unwell due to the extremely hot weather, suffering from headaches, chest pain and high blood pressure, the head of the service Milica Bubalo was cited by news agency MIA. 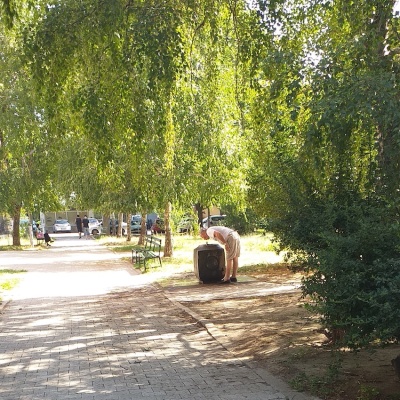 Cooling off at a drinking fountain in a Skopje park.

She said there are increased cases of strokes, problems with chronic illness and traffic accidents.

Living in Skopje, located in a valley surrounded by mountains without free airflow, in the summer is extremely difficult particularly when temperatures go above 35C.

“It is really, really difficult to work in such conditions. Drinking litres of water just does not help,” a young sales agent from Skopje, who was traveling with his van from one store to another in a suburb of the capital, told bne IntelliNews.

People from other towns, especially those with more pleasant weather conditions, cannot imagine living in the capital.

“How do you survive in Skopje during such high temperatures?” asked a shop owner from the lake town of Struga.

Across the border in Albania people have travelled to the city of Pogradec on the Albanian side of Lake Ohrid for its cool climate.

But elsewhere in Albania temperatures have soared and firefighters are battling wildfires that have broken out in recent days.

Many fires have been reported close to Vlora, Albania’s third city and a major tourist destination. One threatened apartments and hotels near Radhima beach, while another fire on the Karaburun peninsula spread rapidly towards the town of Ravenna and Marmiroi church, according to local media reports. The difficult terrain has hampered efforts by firefighters to bring the blazes under control.

On July 31, Deputy Minister of Defence Dallëndyshe Bici visited Ksamil near Gjirokaster in southern Albaia to inspect damage from wildfires that raged for almost eight hours before they were brought under control. 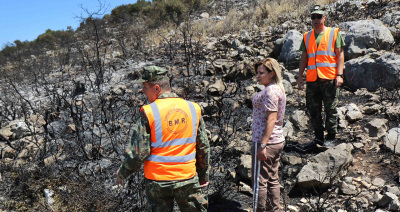 Bici urged holidaymakers and local residents to be careful to avoid causing fires and issued a stern warning to arsonists. Other wildfires remain active, she said.

Elsewhere in the region, daytime maximum temperatures in Kosovo reached up to 38°C and the UV index remains at extreme highs.

Temperatures are high in Bulgaria too, where many people have left the cities for the Black Sea coast. Back in Sofia, most people are staying indoors, or lounging in hammocks that have become a feature in city parks, while children splash in the fountains.

A code red warning has been issued for some of the country, and code yellow for other areas, with warnings the extreme heat will continue into the first week of August.

The hot weather has also contributed to a spike in electricity prices.

As bne IntelliNews reported, the the average electricity price on the spot (day-ahead) market in Romania and Hungary reached €131 per MWh for the delivery day of July 30, a record high.

Prices were pushed up by a combination of extreme heat that resulted in additional demand for power for air conditioners and other forms of cooling and the unplanned outage at one of the two reactors of Romania’s sole nuclear power plant.

The warm weather pushed up the electricity consumption rate in Romania at a new record (8,865MW) on July 29 for the 13:00/14:00 hourly interval, announced Transelectrica.