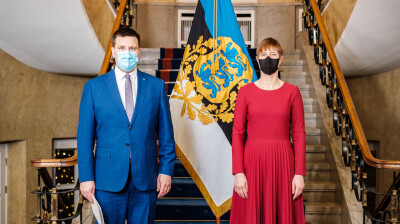 Juri Ratas, the leader of Estonia’s Centre party, was forced to resign as the prime minister last month, following the chief state prosecutor's decision to investigate a Tallinn real estate scandal that embroiled his party.

But how damaging will the fallout be to the party? Can Centre, which stunned the political scene by forming a new government after the 2019 general election with the far-right EKRE and nationalist-conservative Ismaa, play first fiddle again?

As of 26 January 2021, following the resignation of Ratas in January, the party has been a in a grand coalition led by Prime Minister Kaja Kallas of the free market Estonian Reform Party. With Ratas currently sitting outside the cabinet, how long will he put up with the lesser role?

“Our political system normally doesn't hold a grudge. Juri Ratas may come back, but it is up to the party and himself,” Catlyn Kirna, lecturer in international relations at the School of Governance, Law and Society at Tallinn University, told IntelliNews.

The Centre party had long been in opposition under the former leader, Edgar Savisaar. “But his departure has changed this and they have had such a huge support, As many other parties were tired of Reform, Centre has been important and as long as they have their followers and bring in big numbers, they will not disappear from the government,” Kirna emphasised.

Yet the party has some acute issues to address, like the fact that more conservative rural voters and even some Russian voters are moving to EKRE or Isamaa, while the more progressive Russian voters may move to the liberal Eesti 200 (not in the parliament) after Centre formed a coalition with EKRE in 2019, the analyst points out.

Centre, described by most analysts as a social-liberal yet populist party, is one of the two largest political parties in Estonia and currently has 26 seats in the Estonian parliament. The party was founded in October  1991 out of the Popular Front of Estonia after several parties split from it. Ratas has been at the helm of the Centre party since November 5 2016 after Savisaar finally stepped down, and he became prime minister in November 2016 as head of a coalition government with the Social Democrats and the rightwing Ismaa.

Yet Kirna is not convinced of brighter times ahead for the party.

“For the progressive left, especially Russians, Eesti 200 might be the answer,” Kirna said. “This is the key to the Centre party's success and might be its downfall as well: It does not have a very strong ideological leaning. Technically they are a liberal party, member of ALDE, they have represented the left, the right, the Russian party, the protest party, whatever you want…That might also be their end if that mishmash falls apart and people realise it was a party equivalent of three kids in a trench coat all along. “

But Nikolai Kunitson, lecturer of political science and junior researcher of the School of Governance, Law and Society at Tallinn University, argues the Centre party could come out a winner in this current situation, with Kallas playing first fiddle from behind the scenes.

“They tried one coalition, it didn't work and now they are trying a new coalition. They can be called a kingmaker in this political climate,” the analyst told IntelliNews.

Centre is quite strong, he believes, because of its loyal supporters, mostly the Russophone community and elderly people.

“The Russophone community support is in decline, but they are making gains among native Estonians. Their political ideology is not so relevant at this moment,” Kunitson said.

He is convinced that Juri Ratas will definitely be back sooner or later.

“He will probably be the deputy speaker of the parliament, but there is also talk of him running for president, but this is rather unlikely. Also, let's not forget that he actually is a great political leader, who managed to hold together the previous coalition and didn't get into various conflicts with other parties. He is still relatively young and still head of a party,” the analyst underscored.

The main political cleavage in Estonia has not been so much on the liberal/conservative front, but rather on the ethnic side – on the issues related to the Russophone minority, the role of Russia, the Second World War, etc, he says.

“This has been the main antagonism. Now, at this moment, it might be changing, but it is too soon to tell. In that sense, before the fall of Edgar Savisaar, they were a protest party. Not anymore, now they are a ‘regular’ mainstream party,” Kunitson said.

According to him, EKRE is definitely taking more conservative voters from the Centre party.

“And they are getting the Isamaa electorate also. Leftist ideology has not been strong in Estonia and they are mostly behind the already weak Social Democratic party. Probably the more accurate divide would be the liberal-conservative one, where the more liberal members are on the side of the Reform Party and Eesti200, and the more conservative on EKRE/Isamaa. The Centre Party is in the middle, where they have conservative voters, but the younger leadership of the party is becoming more liberal,” Kunitson emphasised.

Matthew Crandall, associate professor of international relations of the School of Governance, Law and Society at Tallinn University, argues that the Centre party has always struggled to be the most popular party.

“Most of the time they have come close to the Reform party but never quite eclipsing them. The coalition with EKRE was certainly not a comfortable one but it was a chance to maintain power and the prime minister position. Going forward, I think we'll see the Centre party in their traditional place, the second largest party and one who will likely not be in charge of the government. Yet people have a short memory in politics, so I don't see significant long-term damage to the party,” Crandall emphasised.

Centre still attracts many elderly voters with their priority being increased pensions, he says.

“So they will continue to attract Russian-speaking voters. The Social Democrat party, which at one time had hoped to win over some Russian speakers, has the lowest support in years. The most important Russian members of the [Centre] party were isolated from the scandals – Yana Toom was in the Europarliament and Kolvart the mayor of Tallinn,” he told IntelliNews. He said that Centre is not a party that wins votes on a transparent governance/anti-corruption platform and therefore he does not expect the Tallinn real estate scandal to severely damage the party

Asked about Ratas’ political future, Crandall reasoned that some former Estonian prime ministers have done better than others.

“Mart Laar, Siim Kallas have been seen as successful prime ministers, Taavi Roivas not so much. I think Juri Ratas certainly will have an opportunity to rebrand himself and be a successful politician but it won't be as prime minister, at least not in the next several years,” the analyst said.

He disagrees with those who tend to call the Centre a protest party.

“There have been several protest parties that have popped up over the years, EKRE being the most recent example, but also the Vaba erakond in 2015 (Estonian Free Party) and now Eesti 200 (Estonia200). Usually, a protest party is defined as a protest against the mainstream parties, people who are sick of all of the traditional powers. But I think that the retirement of Edgar Savisaar and the stagnation of the Reform party were two key factors that enabled the Centre party to be in a position where they could lead the government since 2016. Yet I wouldn't label it a protest party,” Crandall emphasised.

He notes that everyone now tends to focus on populist nationalism and rightwing populism, but leftwing populism is also rising.

“Focusing on climate change, living wage, and so on – that is eerily absent in Estonia. The Green party has been increasing its support but is still polling below the 5% threshold. Eesti 200 is the newest party for protest voters, offering a fresh vision with new ideas. But those ideas are not really populist or leftist.  For leftist protest voters it is a bit of a lonely place in Estonia. The current government has also taken certain steps to cut into support for the Green party and Estonia 200,” the analyst concluded.