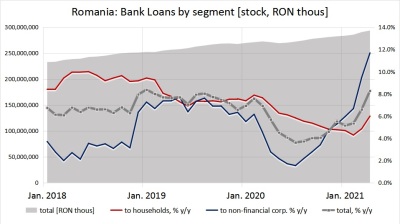 Bank lending gained momentum during the first months of 2021, after the annual growth rate in January was only 5.1% y/y. Meanwhile the portfolios of both household and corporate segments expanded by double-digit rates compared to April 2020. The corporate segment boasted an above-average rise of 17.3% y/y (for local currency loans alone) that furthermore reverses the -0.03% y/y negative performance displayed last April, at the outset of the crisis.

Household lending has always been an active segment of the banking market and the 11.0% y/y increase posted as of April this year comes as no surprise, even after a difficult year. Nonetheless, the past year was not as harsh as expected initially and the repayment moratorium had a positive impact in terms of the stock of loans.

Compared to April 2020, the household lending posted this April a slightly slower annual growth (+11% y/y vs. +12.7% y/y) that does not change the big picture but highlights the momentum gained by the corporate segment. Government guarantees have contributed to corporate lending recently.

As of April, the loans denominated in local currency accounted for 70% (RON206bn).

The stock of foreign currency denominated loans (mostly corporate) contracted by 2.3% y/y to RON87.1bn at the end of April.