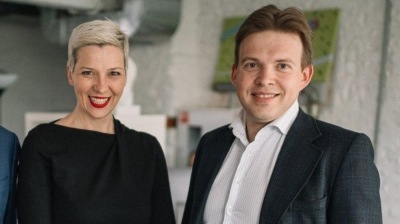 Belarusian opposition leaders Maria Kolesnikova and Maksim Znak were sentenced to over a decade in jail / wiki
By bne IntelliNews September 7, 2021

Officially they were found guilty of “conspiracy to seize state power by unconstitutional means” on September 7 in a closed trial. No evidence of their guilt has every been released and the result of the case was widely considered to be a forgone conclusion.

Belarus' president Alexander Lukashenko has cracked down on the opposition after mass protests broke out following the falsified August 9 presidential election last year.

Kolesnikova was one of the three women – including Svetlana Tikhanovskaya and Veronika Tsepkalo -- that became the icon of the opposition to Lukashenko during their country wide tour of the country ahead of the election. Following the election the other two women, who both have small children, fled into exile, but Kolesnikova remained behind and continued to be a high profile presence during the weekly mass rallies.

Eventually she was snatched from the streets by Belarusian security forces on September 7, who tired to force her to leave the country until she made that impossible by ripping up her passport. She was then retuned to Minsk and put on trial for sedition.

Kolesnikova was formerly the campaign manager of Viktor Babariko, an ex-banker and the leading opposition candidate at the start of the race until he was jailed and has also been convicted of embezzlement and sentenced to 14 years in jail.

In mid-May, Kolesnikova was finally charged under three articles of the Criminal Code of Belarus: Part 3 of Art. 361 (calls to action against national security), part 1 of Art. 357 (conspiracy to seize state power by unconstitutional means), Part 1 of Art. 361-1 (creation and management of an extremist formation). Znak is accused under the same articles.

Kolesnikova and Znak are both founding members of the Coordinating Council, which was set up to represent the opposition in talks with Lukashenko to form a transitional government – talks that never began.

Kolesnikova has been recognized as a political prisoner and a prisoner of conscience. The European Parliament awarded her the Sakharov Prize for her significant contribution to the fight for human rights.

Znak was detained two days after Kolenikova’s arrest on September 9 and charged on September 18. Human rights activists have also recognized him as a political prisoner.

US charges Iran operative with plotting to kill former Trump hawk John Bolton
21 minutes ago
Ukraine will receive $5.5bn in support from the US later this month
14 hours ago
John Malkovich to turn Skopje into Hollywood of the Balkans
15 hours ago
Envoy says start made on construction of Turkish attack drone factory in Ukraine
1 day ago
Huge explosion rocks Russian airbase on the Crimean peninsula
1 day ago