BEYOND THE BOSPHORUS: Tobin tax means it’s back to the good old money changing days at Istanbul’s Grand Bazaar 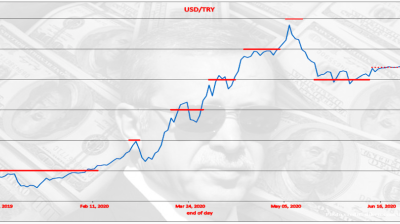 Turks who do not want to pay a 1% Tobin tax on currency conversions are heading to the Grand Bazaar in Istanbul just like during the good old days, pro-Erdogan daily Aydinlik reported on June 17.

Tahtakale at the Grand Bazaar is the most famous over-the-counter (OTC) forex market in Turkey, but it lost its popularity after FX transactions via the financial system became that much easier.

However, the public banks are now asking for a filled-in document from business people demanding to withdraw their FX deposits, Aydinlik also reported. The document has the heading “Why are you making this withdrawal?”

Some private banks will go through with transactions without the presentation of the document, but demand a high commission. But even if the bank customer has the document, the spreads are too high at the lenders.

Questions such as “Why are you buying?” and “Where did you buy?” are also asked of business clients at the banks when they want to conduct FX transactions.

Some business people have registered at export unions to obtain the required document for withdrawing hard currencies from the banks, but if they cannot produce an export record, they are not exempted from the Tobin tax.

Mehmet Ali Yildirimturk, a goldsmith at the Grand Bazaar, told Aydinlik that there was scarcity of foreign exchange at the bazaar since there were no tourists because of the coronavirus emergency.

FX and gold buyers at the Grand Bazaar escape the Tobin tax as long as they do not demand an invoice. However, in any case, the FX rates are “a few kurus” higher at the venue. In other words, “spreads in FX have widened”.

A knock at the door

Aydinlik also cautioned that if you deposit the FX you bought in the bazaar at a bank, the finance office may knock at your door. They didn’t use to do that. But with the Tobin tax hiked to 1%, it is very possibly happening now.

On June 18, government-run news service Anadolu Agency reported that the mint has launched legal assessments on punishing those who sell imitations of official gold coins.

On June 23, the Institute of International Finance (IIF) released a research note on “Parallel FX Rates in EM”. Turkey is not on the list.

ING: Russia balance of payments: supportive of ruble in the near-term, but risks for 2H21 mount.
2 days ago
ING: Growth in the Balkans: from zero to hero again?
8 days ago
FPRI BMB Ukraine: Most Ukrainians are optimistic about 2021 – poll
8 days ago
COMMENT: Record high debt levels will slow post-coronavirus recovery, threaten some countries' financial stability, says IIF
11 days ago
COMMENT: The Manafort Pardon: a finger in the collective eyes of Ukrainians
16 days ago