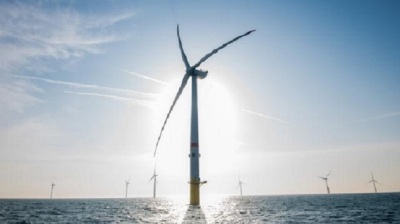 Offshore wind / European Commission
By Richard Lockhart in Edinburgh May 18, 2022

The Commission also increased its 2030 renewable energy target from 40% to 45% as part of a wide range of improvements to its Green Deal programme known as REPowerEU.

“We must now reduce as soon as possible our dependency on Russian fossil fuels. I’m deeply convinced we can,” she continued.

She stressed that Europe had been dependent on imported fossil fuels until now, which had made it vulnerable in terms of the energy security that comes with it.

“It is more urgent than ever that Europe become master of its own destiny, increase its resilience and sovereignty and continue to lead the world in facing the climate crisis,” said EU climate chief Frans Timmermans.

The new spending, which aims to spend up the roll-out of green technology, will ensure that Europe can save €100bnn per year in imports of oil, gas and coal, the EC said.

Rooftop solar is also a major focus, with a mandate requiring solar panels mandatory for public and new residential buildings by 2025 and 2029 respectively.

For Russian gas, the EU aims to reduce usage by two thirds by the end of 2022, before pursuing a mor gradual reduction down to zero imports by 2027. This will allow the build-up of more renewable capacity.

To replace Russian gas, there will have to be investment in Europe’s LNG import infrastructure.

“We have to be transparent, we have to be honest: we have a short-term serious problem because of the Russian [gas that we cannot replace] immediately by renewables. So we will have to go out there in the world and try to find alternatives to Russian gas,” Timmermans said, indicating that contacts have been established with countries such as Egypt, Israel, Algeria and Qatar.

“We might use coal a little bit longer – that has a negative impact on your emissions,” he admitted.

Put simply, there will be more investment in imported gas before higher spending on solar and wind begins to kick in.

“What we’re proposing to them is what I would call a double deal: first a short-term deal to provide us with the fossil fuel that we need, and then a long-term deal to incorporate them in a global system on the production and use of green hydrogen,” Timmermans said.

Von der Leyen said that €10bn would need to be spent on missing links for gas and LNG and up to €2bn on alternative oil infrastructure.

For example, new LNG terminals are due to be built in Cyprus, Greece and Poland in 2023. Several gas storage projects are also in progress in Greece, Romania and Bulgaria.

In March, Timmermans commented that reducing Russian gas imports would be "hard, bloody hard. But it's possible if we're willing to go further and faster than we've done before."

The EU said in March that its REPowerEU programme aims to reduce European gas consumption by 155bn cubic metres, equivalent to the total imports from Russia in 2021. This is more than the previous Fit for 55 proposals of 100 bcm.

Other targets in May 18’s proposals included 10mn tonnes per year of domestic renewable hydrogen production and 10mn tpy of imports by 2030, and a Biomethane Action Plan to increase production to 35 bcm by 2030.

Indeed, the EU also on May 18 published a call for connectivity projects worth €800mn under the Connecting Europe Facility (CEF) for Energy.

The projects are on the 5th Union list of Projects of Common Interest (PCIs) that was published in November 2021.

As well as 67 electricity transmission and storage projects, six CO2 network projects and five smart grids projects, there are also 20 gas projects, which will extend the continent’s exposure to gas as an energy source.

Meanwhile, making permitting simpler and quicker is a key driver of this roll-out. New wind and solar projects will be declared a matter of “overriding public interest,” and the EU wants governments to create “go-to” areas in zones with low environmental risk.

The Commission said that REPowerEU would cost €210bn by 2027, to be funded from the EU budget and carbon market revenues, rising to €300bn by 2030.

This target is enshrined in the European Climate Law, as well as the legally binding commitment to reduce net greenhouse gas (GHG) emissions by at least 55% by 2030,

However, weaning Europe off Russian gas is not without risk. As well as high costs, the continent could experience a period of higher and more volatile energy prices because of the rising cost of fossil fuels.

The Commission has proposed that governments introduce a range of mitigating measures, such as protecting vulnerable households by capping gas prices for consumers and taxing windfall profits made by electricity companies.

However, the need to maintain gas consumption in the short term meant that many have criticised the EU’s measures, arguing that maintaining gas would maintain Europe’s vulnerability, put the EU Fit for 55 targets at risk and locking in Europe to long-term gas commitments.

“The EU has been burned by its reliance on dirty Russian fuels, but now the European Commission is just searching for new fires to stick its hands in. These plans will further line the pockets of energy giants like Saudi Aramco and Shell, who are making record profits on the back of the war, while people in Europe struggle to pay the bills,” said Greenpeace.

“The disproportionate focus on imported liquefied natural gas [LNG] increases the risks of shifting (rather than decreasing) the dependency and of committing to new long-term contracts incompatible with the energy transition,” said green think-tank E3G.

“On the one hand, REPowerEU accelerates the European Green Deal, but on the other hand, it fails to disrupt our fossil gas habits. This inconsistency sets the EU up for a messier and costlier transition than necessary,” said E3G senior policy advisor on gas politics Raphael Hanoteaux.

Meanwhile, the EU’s flagship Emissions Trading Scheme (EU ETS) is to be used to create a €20bn fund, sourced from the sale of EU ETS carbon allowances currently held in the Market Stability Reserve.

Crucially, the EU wants to auction these EU ETS carbon allowances in a way that does not disrupt the market.

E3G warned that this could be difficult. “Selling additional emission permits as a means of financing REPowerEU sets a dangerous precedent and risks jeopardising the EU’s climate targets.”

Europe’s electricity system could become greener, more secure and more resilient while not requiring any funding if the right investments are made to replace increasingly expensive fossil fuels.

An 8% rise in global energy investment in 2022 to $2.4 trillion, driven by a 12% rise in clean energy spending, is still far from enough to tackle the energy crisis and to put the world on the path to a greener and more secure energy future.

World leaders distracted by multiple crises might like to spare a moment to take note of the city of Abadan’s experience of a brutally hot 52.2°C.