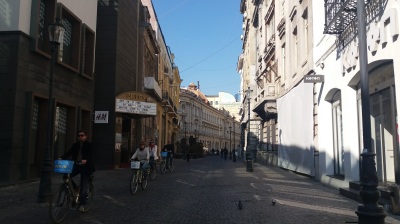 Investment volumes in Romania’s real estate market have remained healthy since the start of the pandemic, a new report from JLL showed.

JLL reported a property investment volume of around €309mn in Romania in the first half of 2021, which was almost 22% lower than in the same period of 2020. This was due to smaller deal size — the average size dropped to €21mn — while the number of transactions increased.

“Transactions started during the pandemic were closed in H1 2021, proving that investors are still having appetite for commercial properties in Romania, encouraged by the swift macro-economic recovery,” said the report.

The capital Bucharest remains the preferred investment destination in Romania, accounting for around 69% of the total transaction volume in H1 2021. Other popular cities are Timisoara, Iasi and Oradea.

According to the ‘CEE Investment Market’ report, the number of deals increased in the first half of 2021, with the office sector accounting for almost 64% of all transactions. Office deals were followed by industrial space (24%), hotels (9%) and retail (3%).

The biggest deal during the first six months of the year was the sale of the Campus 6.2 & 6.3 buildings in Bucharest for around €97mn.

The first half of 2021 also saw the sale of the first phase of The Light, and the acquisition of Bucharest Financial Plaza, as well as several smaller deals in secondary and tertiary cities.

The largest industrial transaction in H1 2021 was the acquisition of the Catalyst industrial portfolio, with assets in Timisoara, Arad and Caransebes.

Industrial and logistics space has been in demand. However, as noted by JLL, “the limited investment activity in this segment is due to lack of product as the market is dominated by strategic players who very rarely sell”.

The report noted that prime office yields in Romania are at 7.00%, prime retail yields at 7.25% and prime industrial yields are at 8.00%. For office and industrial space, this is the same as 12 months ago, but retail yields have increased by 25 bps over the year. “Romania is still well positioned from a yield perspective, as the current values are still well above those registered in the last peak (2007) and those currently quoted in the rest of the region,” said the report.

“We expect that investment volumes in 2021 will be close to the total registered in 2020, although in this period accurate predictions continue to be difficult to make,” according to JLL.

“Nevertheless, with the vaccination process going strong and considering the significant amount of sidelined capital targeting real estate, these forecasts may improve. Prime yield may come under pressure for logistic and potentially office, in line with regional evolutions, but this will also depend on debt availability and terms.”