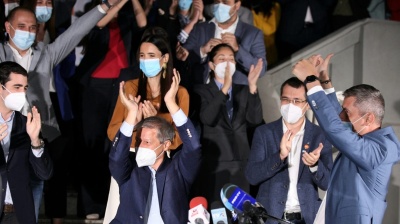 Nicusor Dan of Save Romania Union (USR) is heading for a victory in the Bucharest mayoral race, as exit polls show he is on track to defeat the incumbent, Gabriela Firea of the Social Democratic Party (PSD) by a margin of 49% to 38%.

Exit polls and partial results also indicate that USR and its partner Plus are likely to score wins in first-tier cities like Timisoara, Brasov and Iasi, defeating candidates of Romania’s two main parties, the ruling National Liberal Party (PNL) and the PSD that is the largest party in the current parliament.

The September 27 local elections thus appear to have one clear winner: USR-Plus, which will go on to play a key role in the general elections on December 6.

Bucharest’s future mayor Dan was formally the candidate of PNL-USR-Plus. However, what secured him votes was his own credibility and his record as the founder of Save Bucharest Union, the NGO that he set up years ago, which turned into the country-wide political party USR, to later merge with Plus, the party of former European commissioner and ex-prime minister Dacian Ciolos, and get the political support of the PNL, which found itself in the position of having no credible candidates in Bucharest.

USR-Plus candidates, supported by the PNL in Bucharest, are set to win two or possibly three out of the six district mayoral seats in Bucharest as well.

In some big cities, USR-Plus candidates defeated the PNL such as in Timisoara where Dominic Fritz defeated incumbent PNL mayor Gheorghe Robu or in Brasov where Allen Coliban surpassed incumbent PNL mayor Gheorghe Scripcaru. In Constanta, another big city, USR-Plus candidate Stelian Ion was close to defeating the PNL’s candidate Vergil Chitac, who seems to have eventually won the race. In Iasi, the biggest city in northeast Romania, USR-Plus’ Cosette Chicirau seems to have defeated Gheorghe Chirica, the incumbent mayor of the city who won his seat as a member of the PSD but switched to the PNL in these elections.

As the general election approaches, USR-Plus, despite still not having consolidated after the merger and facing internal tensions, proved to be a necessary ally of the PNL.

Meanwhile, the PNL looks to have consolidated its position in local administration at country level, thus getting a head-start in terms of logistic, financial and credibility resources in its race with the PSD.

The situation in Bucharest is relevant at country-level: the PNL needs USR-Plus’ robust credibility among young voters, because its own candidates are often seen as not much different from those of the Social Democrats (namely, potentially corrupt and not particularly competent). But USR-Plus needs the robust apparatus that the PNL will be able to use in the general election to gain as many votes as possible. The better the PNL does in the upcoming election, the stronger its post-election bargaining position vis-a-vis USR-Plus.

The PNL and USR-Plus still have no formal partnership and their post-electoral alliance, if eventually reached, will probably not be smooth and easy-going but will be the most stable scenario.