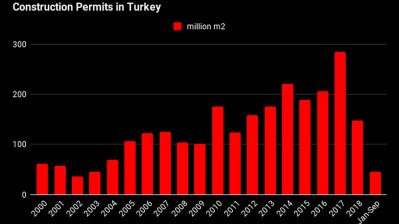 Turkey’s economic turmoil has hit its construction industry like a demolition ball. That much is known—the number of Turkish building construction permits fell by 57% y/y to 33,684 in January-September from 78,567 a year ago, statistics institute TUIK said on November 19.

In the same period of the boom year of the country’s construction industry, namely January-September 2017, 132,848 such permits were issued.

Under the near 17 years that Recep Tayyip Erdogan has led Turkey either as prime minister or, like now, as president, the debt-fuelled construction sector came to be seen as the main driver of economic growth and one of the big employers.

The latest data also shows that the floor area linked to construction permits awarded by municipalities decreased by 58% y/y to 45mn square metres in the first nine months of this year while the total estimated value of the buildings to be constructed decreased by 49% y/y to TRY73bn ($12.8bn).

The number of dwelling units authorised under construction permits declined by 64% y/y to 179,766 across the three quarters.

TUIK said on October 22 that annual growth in the official construction costs index sharply fell to 11% in August from 18% in July due to the base effect from the 33% rise recorded in August 2018.

For three months, government officials have been pushing a latest rescue plan in the form of sharp cuts on mortgage loan interest rates. It is supposed allow construction and real estate companies to offload unsold stock.

There are a total of 1.5mn-2mn unsold homes in Turkey, according to sector representatives.

Weighted average interest rates (WAIR) on lira-denominated mortgage loans stood at 13.01% as of November 8, according to the latest data from the central bank.

Annual home price growth in Turkey edged up to 6.32% in September from as low as 1.48% in May; the figure remained below official inflation.

Turkey’s official annual consumer price inflation fell to 8.55% in October from 9.26% in September.

A marked recovery is visible in mortgage sales that have taken place since August following the interest rate cuts, but the level of that recovery is far from rescuing the construction industry or providing hope for sustainability.

The construction industry contracted by 13% y/y in Q2. It was the fourth consecutive quarterly contraction since Q3 2018, according to the latest GDP data.

Some limited growth in the construction industry may be outlined in the official GDP figures for Q3 due to the base effect provided by the 6% contraction reported for Q3 2018.