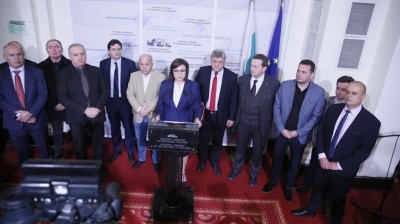 The Bulgarian Socialist Party (BSP) filed a no-confidence motion against the government of Prime Minister Boyko Borissov on January 20 over its failure to deal with water and waste crises, as well as with the deadly air pollution in some cities.

This is the fourth motion filed by the BSP. It was backed by ethnic-Turk Movement for Rights and Freedoms (DPS), although the party has not signed it formally.

Most likely, the motion will fail as the BSP and DPS do not have enough MPs in parliament. Together they have 104 MPs versus 106 MPs of the ruling coalition between Borissov’s Gerb and the far-right United Patriots.

The BSP’s decision comes amid a water crisis in the town of Pernik, which has already led to charges against former environment minister Neno Dimov, who was arrested and resigned earlier in January.

According to the BSP, half a million people in Bulgaria, a country of just over 7mn people, face restrictions on water use.

Meanwhile, the prosecution has initiated probes into allegations that illegal imports of waste were covered up by Dimov.

In December, local media revealed reports that Italian authorities are investigating illegal exports of garbage to Bulgaria from the Italian mafia, reportedly to be burned in local power plants.

Dimov said following these reports that the environment ministry had not received applications for waste imports from Italy. So far, the prosecution has not charged him in connection to the waste.

Meanwhile, earlier in January the government announced that it will ban all imports of garbage until the prosecution completes its investigation.

The waste being burned in local power plants provoked another investigation, launched in September 2019, into four coal-fired thermal power plants, all allegedly owned by or connected to controversial businessman Hristo Kovachki, following reports of illegal burning of waste that is threatening the environmental in the country. Results of this investigation are yet to be announced.

Speaking on January 20, BSP leader Cornelia Ninova said that while so far the focus has been on garbage from Italy, the question of imports and incineration of garbage from other countries remains open. "This junk has not fallen from the sky. It went through Bulgarian customs, they have been granted permits by Bulgarian institutions, someone has signed a signature to turn Bulgaria into a dump for the world,” she said.

At the same time, Bulgaria has not marked any progress in improving air quality, despite a decision of the European Commission in July 2019 to refer the country to the Court of Justice of the EU over poor air quality as the country is failing to respect limit values of sulphur dioxide (SO2).

SO2 data have showed that in southeastern Bulgaria, where the four largest coal-fired plants are located, the limit values for SO2 are persistently non-compliant with the EU standards.

As Bulgaria has failed to meet the air quality standards, the country had the obligation to adopt air quality plan with appropriate measures so that the exceedance period can be kept as short as possible, but no such plan has been adopted to date.

The capital Sofia and other big cities have suffered from dangerous levels of air pollution for most of this winter, and face masks are gaining popularity as citizens try to protect themselves.

Ukrainian President Volodymyr Zelenskiy is considering the nation's veteran politician Serhiy Tigipko for the post of the Prime Minister, the Kyiv Post reported on February 25 citing three sources in the Ukrainian government.

Following the rally in Russian utility universe, putting the sector ahead of every other Russian equity segment in year-to-date terms for 2020, VTB Capital sees more place for upside for certain names coming from expected profitability gains.