The Turkish government is pumping up the economy using credit as normal. For the meantime its a good idea as consumer credit rises fast in Turkey, but is down everywhere else. But it could end in tears, as it has before
By Jason Tuvey of Capital Economics in London July 9, 2020

Turkey’s credit boom that started towards the end of last year has been turbocharged in recent months and this should provide some welcome support to the economy as it emerges from the coronavirus crisis. That said, the nature of the lending reinforces our concerns regarding another credit-fuelled consumption binge, the growing influence of state banks and the outlook for the public finances.

The latest weekly data show that lending by Turkey’s banking sector, adjusted for exchange rate effects, has increased by around 14% on a 13w/13w basis (equivalent to a quarter-on-quarter rate) throughout most of the past couple of months. (See Chart 1) That is by far the quickest pace of growth since the weekly loan data began in 2014 and almost twice the rate recorded at the height of the credit boom in 2017 that ultimately laid the foundations for the currency crisis in the following year.

Banks’ willingness to lend has been supported by a raft of policy measures. As well as cutting interest rates by a cumulative 250bp since March, the central bank further tweaked reserve requirements to incentivise banks to ramp up lending. Meanwhile, the government has doubled the size of its support to the Credit Guarantee Fund, which could help to support as much as TRY250bn (5.8% of GDP) of extra lending.

In the near-term, the credit boom will provide some welcome support for the economy. In particular, the jump in commercial lending will almost certainly have helped some firms to survive as the coronavirus crisis has caused their revenues to dry up. (See Chart 2) In turn, this will help to limit the rise in unemployment and long-term scarring effects on Turkey’s economy from the crisis. It’s worth noting, too, that the steep rise in lending to firms mirrors with the picture in other parts of the world.

If economic activity and demand recovers rapidly over the coming months, many firms are likely to be in a position to pay back some of the “emergency” financing relatively quickly. That all being said, there are elements of the recent credit boom that ring alarm bells.

First, the allocation of credit in recent months means that banks will, sooner rather than later, have to nurse losses on their loan books. Some sectors will inevitably recover more quickly than others. The tourism sector, which is larger in Turkey than in many other parts of the region, is likely to suffer the biggest hit from the crisis. (See here.) A sizeable chunk of the rise in bank lending this year has been to those sectors, such as tourism as well as hospitality and transport, that are most vulnerable to ongoing social distancing and travel restrictions. (See Chart 3) Second, the authorities appear to be relying on credit as the main channel to stimulate demand. One sign of this is that lending to households has continued to rise at a rapid pace – consumer lending (including credit cards) is growing by around 10.5% on a 13w/13w basis, above to its peak before the coronavirus crisis escalated. (See Chart 2 again.) This stands in stark contrast to other parts of the world, where consumer lending has generally been scaled back as households have used any enforced savings to pay down debts or have been reluctant to borrow due to the uncertain economic environment.

Clearly, strong consumer lending is not a major concern in the current environment and, if anything, is to be welcomed if it helps to smooth consumption. But there’s clearly a major risk that this morphs into another credit-fuelled consumption binge that has been a key feature of Turkey’s boom-bust cycles seen over the past decade. What’s more, the rise in unsecured “personal finance” loans has coincided with a decline in lending via credit card, which may be a sign that banks are “evergreening”. (See Chart 4) Third, the latest credit boom has exacerbated the trend of a rising share of lending being undertaken by state banks. State bank lending has surged in recent months (see Chart 5) and accounted for around two-thirds of the overall rise in credit so far this year. The result is that state banks’ share of total lending has risen to almost 50% – up from less than 30% six years earlier. (See Chart 6) We warned about the growing influence of state banks in a Focus last year. In short, lending by state banks tends to be driven by political priorities rather than economic rationale. For now, this doesn’t seem to be creating major problems – state banks’ share of bad loans is relatively low compared with other banks.

Nonetheless, research by the EBRD shows that, in the run-up to elections at least, state banks redirect their lending away from opposition-controlled provinces to those controlled by the ruling government. Those provinces that lose out tend to be among the most productive economically in Turkey.

In addition, lending by state banks tends to be geared towards some of Turkey’s least-productive sectors, such as agriculture. And we’ve warned before that, in pursuit of faster economic growth, the Turkish authorities may loosen lending criteria of state banks. The resulting misallocation of resources runs the risk of a larger rise in non-performing loans than would otherwise be the case further down the line. In addition, it will ultimately harm Turkey’s long-run economic prospects.

Finally, the credit boom could ultimately add to the burden from the crisis on the public finances. In the near term at least, we doubt that a rise in banks’ bad loans will result in the need for a round of government-funded recapitalisations. (See here.) But the government is on the hook if loans guaranteed under the expanded Credit Guarantee Fund turn sour. And it’s not out of the question that the government becomes inclined to write off loans taken out by households and firms during the crisis (and reimbursing banks) in an effort to boost the recovery. We argued in a previous Update that Turkey’s public finances are no longer a pillar of strength and any additional pressure on the budget resulting from the latest credit boom would further add to our concerns. 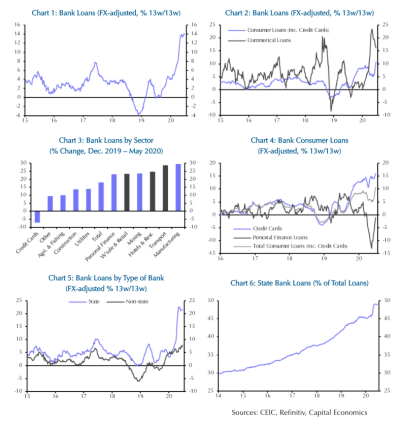 OPINION: “Patronagists” scandal brings back memories of the communist era in Albania

Was Russia preparing to invade Ukraine? A look inside Moscow’s strategy

The recent build-up and withdrawal of Russian forces at Ukraine's eastern border forms part of President Putin's coherent strategy to recover control of Ukraine and reverse the 1991 territorial losses stemming from the 1991 collapse of the USSR.

COMMENT: Political interference in Naftogaz supervisory board operations is a major setback in corporate governance reform

Ukraine’s business community and its supporters abroad condemned the Cabinet’s decision to sack the widely respected CEO of Naftogaz Andriy Kobolev on April 28, calling it an abuse of corporate governance that will undermine foreign investment.

ING: Czech economy falls by less than previously feared in 1Q
9 hours ago
OPINION: “Patronagists” scandal brings back memories of the communist era in Albania
16 hours ago
COMMENT: Philanthropy in Russia – not for the faint-hearted
5 days ago
Was Russia preparing to invade Ukraine? A look inside Moscow’s strategy
6 days ago
COMMENT: Political interference in Naftogaz supervisory board operations is a major setback in corporate governance reform
6 days ago