CAUCASUS BLOG: With Aliyev on the rampage, flickering hopes of democracy in Azerbaijan could sputter out 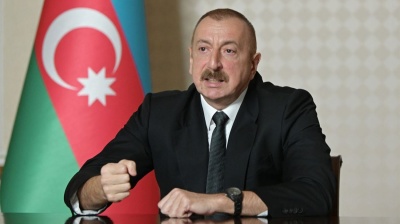 Aliyev has made it clear he won't be listening to any international organisations as his regime stamps out opposition politicians he claims have crossed the line.
By bne IntelIiNews July 31, 2020

The dream of achieving democracy in Azerbaijan is a flickering flame that in the past three weeks has seemed in danger of sputtering out.

An editorial published by The Washington Post on July 29 perhaps summed up things best in observing that the country’s ruler Ilham Aliyev has “blown a gasket” with a “tantrum” that is “threatening to obliterate what remains of independent political forces in Azerbaijan”.

“Mr. Aliyev's use of the iron fist to destroy his critics is the opposite of democracy and why everyone should worry about this intemperate tyrant," the editorial concluded. 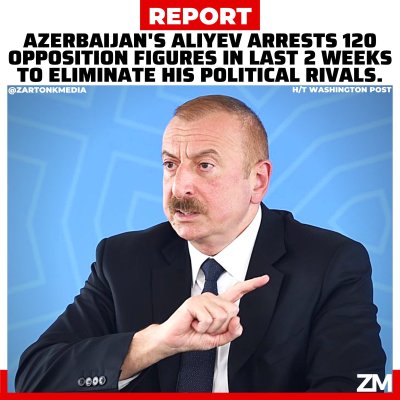 The situation as portrayed by Armenian multimedia outlet Zartonk Media.

Tantrum or not, Aliyev seems intent on using every crisis—particularly the coronavirus (COVID-19) emergency and the outbreak of new skirmishes with neighbour Armenia over longrunning border disagreements—to crack down on his country’s already heavily repressed opposition.

Rather than deal with growing public dismay and dissent over pervasive corruption, the perceived bungling of the oil-dependent economy, again growing sickly on low oil prices, and a poor outcome in the fight against the pandemic, Aliyev has been busy pulling the levers of tyranny. With all the major powers so utterly consumed by their own crises right now, it appears he has all the cover he needs to do so.

As many as 120 opposition figures and supporters have been rounded up in the past two weeks by Aliyev's security services. Among them are senior members of the largest opposition group, the Azerbaijan Popular Front Party (AXCP).

Azerbaijan watchers have disturbingly concluded that the charges brought of "attempting to overthrow the government" against Fuad Qahramanli and Mammad Ibrahim of the AXCP indicate that the oppressive Aliyev is ultimately seeking to detain and silence AXCP leader Ali Karimli.

Karimli indeed proposed on July 30 that he should be arrested in exchange for the freeing of more than 40 AXCP members whom he says have been placed in jail cells on charges that are a sham. He has also said he stands ready to resign as AXCP leader if it helps achieve an end to the huge crackdown on the opposition.

The crackdown has not stopped at the AXCP. It has also gone after members of other parties that are part of the National Council of Democratic Forces alliance. It groups the AXCP, the Musavat Party, the Muslim Unity Movement, and others.

Alex Raufoglu, a Washington-based Azerbaijan specialist for Amnesty International, told RFE/RL that Aliyev's latest crackdown has been ominously calculated. "President Aliyev feels he has a green light for this crackdown because Western democracies are too busy right now focusing on their own problems with the coronavirus and their economies," says Raufoglu, who also is a journalist for the independent Turan news agency base in Baku.

"Thanks to COVID-19 and recent border clashes between Azerbaijani and Armenian forces, Aliyev has found that he can go after his opponents without having to face international criticism," Raufoglu added. "With a snap of his finger, President Aliyev can decide everything himself in the cases against his rivals without any due process. This could be the death of the dream for democracy in Azerbaijan."

Aliyev, president of Azerbaijan since 2003 when he succeeded his late father Heydar Aliyev, like his strong ally Turkish President Recep Tayyip Erdogan with whom he has presently busy overseeing joint military exercises in a not-so-subtle rattling of sabres at Armenia, brooks little dissent. He has shut down independent media outlets, run elections that even basic scrutiny exposes as neither free nor fair and has banned international monitors from groups like Human Rights Watch and Amnesty International that exposed how his regime routinely use torture to extract false confessions from political prisoners.

“Historical necessity”
As the pandemic took a grip on Azerbaijan in the spring, Aliyev stepped up his targeting of the opposition, referring to "enemies who are among us" and a form of "fifth column" "traitors" whose "main goal is to destroy Azerbaijan". "The isolation of representatives of the fifth column will become a historical necessity" during the pandemic, Aliyev proclaimed, as reported by RFE/RL.

The ongoing crackdown was launched after Azerbaijan's July 12-16 military clashes with Armenia that left 11 Azerbaijani servicemen, including a general, dead. Amnesty has described it as unprecedented.

Wisely, with feelings over the showdown with Armenia running high, on July 13 the AXCP announced that the opposition would not mount any political demonstrations as long as fighting continued along the border. "We are behind our state and the army," AXCP leader Karimli declared.

Nevertheless, Aliyev has managed to paint the pro-democracy opposition as being unpatriotic at a critical time for national security.

On July 14, Azerbaijanis poured into Baku's Freedom Square in a rush of patriotism and support for the country's armed forces. At this point, things took a strange turn. Observers said police directed the crowd to move several kilometres across Baku and reassemble at the Martyr's Alley national cemetery near parliament. The cemetery contains the graves of Azerbaijani soldiers made national heroes that fell in the still unresolved conflict with ethnic Armenian separatists over Azerbaijan's breakaway region of Nagorno-Karabakh. Some time into the demonstration, a group of people from within the crowd suddenly emerged and stormed into the nearby parliament building, where they were removed by police. Several police cars were, meanwhile, overturned by angry crowds. Opposition leaders claim the incident was a "provocation" staged by Aliyev's henchmen to provide justification for the big political crackdown that followed.

“Worse than the Armenians”

The AXCP's Qahramanli and Ibrahim did not even attend the rally. But the next day, on July 15, Aliyev gave a nationally televised speech in which he painted the pro-democracy opposition as "enemies" who were "worse than the Armenians."

“We have won a great victory and the people supported us," Aliyev claimed. “The people came to Martyr's Alley to celebrate the victory and honour the memory of our martyrs, and some shameless elements cause riots there?” “This will not happen,” Aliyev declared. "It is not the beginning of the 1990s. We have taught and will teach them a lesson.”

The president claimed that he'd been “informed” that “some opposition structures, including representatives of the Azerbaijan Popular Front Party, infiltrated the masses and tried to induce people to take illegal actions”.

“They were also among the lawbreakers and have already been identified,” Aliyev said, asserting that he would “not pay attention” to criticism from the Council of Europe or other “international organisations” about his decision to go after the opposition. He claimed the Popular Front was “worse than the Armenians.”

In future, Aliyev added, he would “block anti-Azerbaijani” candidates from challenging his government and trying to “slander Azerbaijan”.

Of course, in these situations, it helps to have a beacon of democracy and great power to offer the dangerous dictator some wise counsel. Alas, the US is rather struggling to fulfil that role nowadays.

On July 20, the US State Department urged Azerbaijan to avoid using the pandemic to silence “civil society advocacy, opposition voices, or public discussion”. Aliyev’s foreign ministry promptly replied with a comment mentioning the protests over racial inequality in the US, saying: “In this situation, we cannot understand who the U.S. State Department is worried about and why.”

CAUCASUS BLOG: The long and illegal road to Stepanakert

CAUCASUS BLOG: Mkhitaryan hoo-ha a reminder that few people usually give a damn about sportswashing

Reflections from our correspondents on the ground in Armenia, Azerbaijan and Georgia.