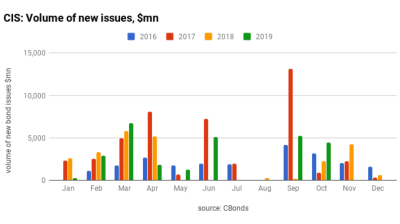 CIS companies issued 18 bonds worth $4.5bn in October of which two thirds were from Russia
By Ben Aris in Berlin November 8, 2019

Bond issuers from Eastern Europe were active in October with 18 bonds issued worth a total of $4.5bn of which two-thirds of the value and 14 out of the 18 were Russian bonds, according to data provided by CBonds.

The issues from Central Europe were more subdued with a total of six issues worth collectively $2.2bn, less than half of the eight issues that raised a total of $5.9bn in the same month a year earlier and a similar amount to that raised in October 2017.

On a cumulative basis issuers from Central Europe have raised a total of $39.4bn over the first ten months of the year, which is already more than the $39bn they raised in all of 2018, but behind the $49.8bn that was raised in 2017. CEE issues have been fairly evenly spread out over the year, but May, September and October were particularly quiet months accounting for 5.8%, 1.8% and 5.6% of the total issues YTD respectively.

By contrast bond issuers from the CIS were considerably more active this year than in the previous two years. The total of $4.5bn raised this October was double the $2.2bn raised a year earlier and five times more than the $876mn raised in October 2017.

Cumulatively, issuers from the CIS issued a total of $27.8bn over the first ten months of this year, which is already more than the $24bn that was raised in all of 2018, but well down on the $44.3bn raised in all of 2017 – a vintage year when the lion’s share of bonds were issued in the first half.

This year March and June were particularly strong months for bond issues, but September and October have proven to be equally strong accounting for 18.8% and 16.1% of all the issues YTD. March was the strongest month accounting for just under a quarter (24.3%) of all the bonds issued in the CIS YTD.

From the non-Russian bonds on offer in October most came from Ukraine with leading metallurgical company Metinvest issuing $500mn with a yield of 7.75% that matures in 2029 as part of its debt restructuring programme.

Next month’s round-up will also include more large Ukrainian issues as its leading companies are taking advantage of the economic recovery and better macroeconomic fundamentals that have led to improved sentiment to issue bonds for their investment programmes. Ukraine's natural gas monopoly Naftogaz also raised $500mn via a seven-year Eurobond at the start of November and other big state-owned enterprises (SOEs) are expected to come to market in the coming year.

But as usual the Russian issuers accounted for the largest part of October’s Eurobond issues. Russians issued a total of $19.6bn over the first ten months of this year, which is already more than the $13.1bn raised in all of 2018 but behind the $27.3bn raised in all of 2017 – the banner bond year.

In Russia’s case March was an even more active month than it was across the whole CIS, accounting for just under a third (31.1%) of all issues, while June, September and October were all active months accounting for around 15% each of the total bonds issues YTD.

The issuers were an assortment of leading Russian bluechips from banking, telecoms and metal and mining, which were raising cash for their capex programmes.