Challenger to Erdogan to be named 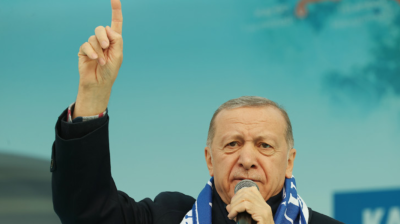 Erdogan in campaign mode at the weekend. / Turkish Presidency.
By bne IntelIiNews January 23, 2023

Turkey's six-party opposition alliance looks set to announce their presidential candidate for the country’s elections in February. May 14 was confirmed as date of the polls at the weekend.

"The name of the presidential candidate will probably be declared sometime in February," Unal Cevikoz, an adviser to the main opposition Republican People's Party (CHP) leader Kemal Kilicdaroglu, informed media on January 20.

Cevikoz added that leaders of the six opposition parties would on January 30 set out their proposals for a transitional period to a parliamentary system from the executive presidential system brought in by President Recep Tayyip Erdogan and their government programme.

Erdogan, who has served as Turkey’s leader for 20 years, will stand for re-election as the head of his Islamist-oriented Justice and Development Party (AKP). The AKP is allied with the far-right Nationalist Movement Party (MHP. Together, the parties make up the Public Alliance.

The opposition alliance, named the Nation Alliance, is made up of Turkey's two main opposition parties, the secularist Republican People’s Party (CHP) and the centre-right nationalist IYI Party, who are allied with four smaller parties.

Parliamentary elections will be held in parallel with the presidential contest.

The elections are the last chance for the opposition to forestall Turkey’s descent from a country with independent institutions and centres of power into what would be a personalist regime revolving around its leader, Gonul Tol, director of the Middle East Institute’s Turkish Studies programme and author of “Erdogan’s War: A Strongman’s Struggle at Home and in Syria,” was on January 22 cited as saying by The Intercept.

Tol added: “Turkey has become a textbook ‘competitive authoritarian’ country. It is authoritarian in the sense that Erdogan jails his opponents and institutions have been hollowed out, but it’s competitive enough that we can talk about meaningful elections.

“Obviously the playing field is not level, and the opposition are having a hard time, but there are elections and there are limits to how much they can be rigged, particularly in the big cities.”

The academic also noted that “the biggest weakness of the opposition is where they stand on the Kurdish question. From a simple math point of view, if the opposition coalition manages to appeal to the Kurdish population, they will likely win the elections, whereas if they don’t have that support, it will be very difficult, if not impossible.”

Around 42% of Generation Z in Turkey would support the Nation Alliance and 22% the Public Alliance if elections were held in January, according to an ORC Research opinion poll reported by Turkish Minute on January 20.

Rostelecom already controls another "big four" mobile operator, Tele2 Russia, and the acquisition of MegaFon would result in large-scale state consolidation of the TMT sector.